The traditional territory of the Anicinabek extends from the St. Lawrence River in the east, to the Ottawa River region in the west and south, and to James Bay in the north. How was life when we traveled this territory? What did we eat? Where did we live? Were there chiefs? How did the children learn?

This exhibition is an invitation to travel in time. It tells the story of a band, ours. We live today in Lac Simon in Abitibi. 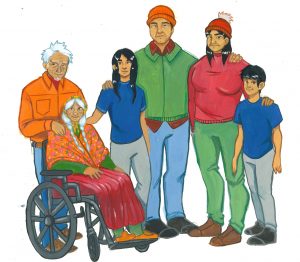 In our culture and community, the cohabitation of generation is important: mocom, kokom, ikwesis, inini, ikwe, ockinawe

It was not until the beginning of the 20th century that our band was formed and our community developed. Lac Simon was officially recognized as a reserve in 1962. In the beginning, the band had only few dozen of members. At first, our presence in Lac Simon was limited to the summer months, but it has since intensified. Today, there are more than 2000 of us living there permanently. In spite of everything, we continue to travel the territory and to transmit our culture. 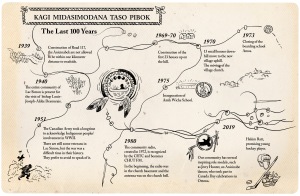 Did you know that we rarely mentioned dates when we tell our story?

Our history is important because, from the youngest to the oldest members of our community, we are all part of that history today and tomorrow.

Women sewing moccasins on the shore of Lac Simon