Why did we choose to settle in Lac Simon? Did we live there all year round? Lac Simon was one of the places where many families from different nations gathered. When the warm season arrived, we would meet there. The rest of the year, the families were scattered over the territory. In family groups, we moved around according to the needs of trapping and hunting. 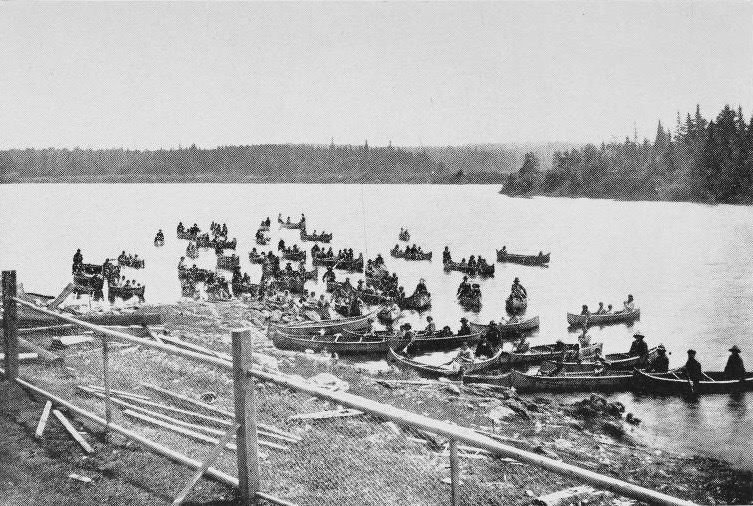 Arrival of the families at Kitcisakik,  Grand Lac Victoria mission in 1907.

We didn’t have family names before. They came with the caterers and missionaries. These names changed over time. Colonial authorities changed names to family names and recorded them with different spellings. Other names were changed when children went to boarding school. Some Anicinabek surnames have meanings, for example:

In the early 20th century, a dispute in the Kitcisakik (Grand Lake Victoria) band led Ignace (Nias) Papatie and a group of Anicinabek to break away from the band and form a new one. This group settled in Lac Simon, mainly on the eastern shore where the sun rises. They built small wooden houses there. They were scattered as far as the mouth leading to Louvicourt. They left them in the fall to return to their territory. Our band was still semi-nomadic.

Pierre P. says, “In front of the lake, in the bay, there were barked trees, as indicators of the presence of individuals in this territory.”

Summer camp in the early 20th century, showing a canoe being made.