How did our ancestors mark the death of a person? Were the dead buried? The death of a person represents a loss for the family and the whole community. Out of respect, daily activities are stopped. Even today, our community pauses when someone dies and takes time to surround the deceased family.

In the past, the Anicinabek did not bury their dead. We built platforms (tecipitakan), in the woods with moss on the bottom and walls made from birch trunks. The body was wrapped in birch bark with slats of inner ash bark to hold it. The upper part of the body was placed upwards with the head to the west and the feet to the east, so that the soul of the deceased could travel in peace to the spirit world.

But for more than 150 years, with the influence of the missionaries, the dead have been buried in cemeteries. Many families still have their own cemetery. 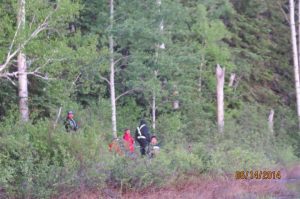 Other cemeteries reunite several families, such as the one near Lac Simon, on the Point. The cemeteries are witness to the community history and show that the territory has been occupied for centuries. Unfortunately, industries have destroyed some cemeteries or displaced them. This is the case, for example, with the construction of the dam at Dozois Lake, which submerged three indigenous cemeteries.

Pierre P. says, “In the 1940s, an epidemic hit the Anicinabek, resulting in many deaths. An elder, Solomon Papatie, saw this Spanish flu episode and said that they couldn’t dig graves fast enough for all the people who were dying one after another. This caused the population of Kitcisakik to be much smaller.”