How were the tasks organized? Who did what? When life depended on the land, it was not possible to be single, because the tasks of men and women were complementary. You had to be autonomous and work together for the survival of the family. 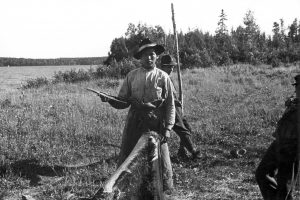 Man showing the scraper he uses to prepare the moose hide. 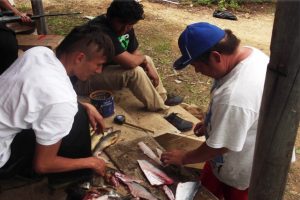 A man shows how to skin a fish.

Men were hunting, trapping, fishing and doing heavy work, such as cutting wood. Gradually, men began to work for the Euro-Canadians, as hunting guides, loggers, drivers, in construction, etc. Sometimes, in order to do wage jobs, the men left the community for a few months each year (accompanied or not by their family).

Today, they work mostly in Lac Simon or in the surrounding area.

In the camp, the woman prepared the skins and food, maintained the camp and took care of the youngest children and the elders who were too old to move. Anicinabek women gave birth in the territory, alone with their man or with the help of other women.

The same division of labor continued as families moved down the hill. It was primarily men who held seasonal wage jobs. Beginning in the 1970s, women also began to hold wage jobs in the community and in the region. 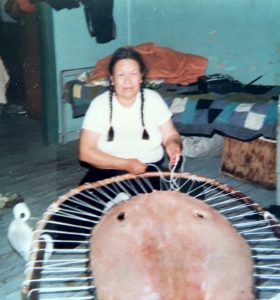 In Lac Simon, the women are the ones who stretch the beaver pelts to dry them, a job reserved for men in other Anicinabek communities. 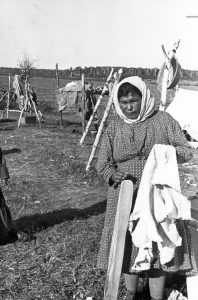 A women holds a tanned hide on which she works.