What did our ancestors believe in? Did they practise a religion? Before the arrival of the Catholic missionaries, the Anicinabek had their own beliefs related to nature. There were rituals before and after the hunt, for example, to show our respect for the animals and to establish good relationships with them.

Jeannette B. says, “The moose gives its life. It gives its life to feed human beings. That’s why we owe respect to the moose. We must preserve the bones afterwards. We must not throw them away. We must return them to nature, all the bones.”

The shaman played an important role. He was the one who prepared the shaking tent (kozabidjin), the most powerful ritual: the shaman would stand inside the tent and call the animal spirits. He would translate their words to help heal someone, search for someone lost in the forest, help the unlucky and exorcise bad spells.

Gerard W. says, “A man from Kictisakik had received one [curse] and was unable to sleep. One day he tried to escape by the river, but he capsized because he was too tired.” 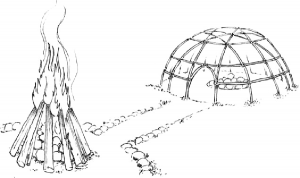 When we began to visit and stay at Lac Simon, we knew about Catholicism. We practised it mostly in the summer when we were gathered at the lakefront near the church. Today, some major holidays, such as Christmas, and some sacraments (baptisms, weddings, etc.) are celebrated in church. Other religions are represented in the community: Jehovah’s Witnesses, Anglicans, Pentecostals. 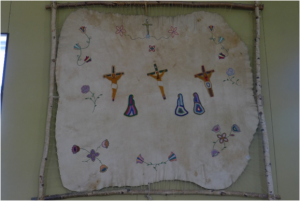 A step in the Way of the Cross embroidered on moose hide by the women of Lac Simon in the 1970s.

Since the 1990s, an indigenous spiritual movement has developed. It is a move towards traditional values and a way of proudly affirming one’s indigenous identity. Every year, our community organizes a pow-wow in July: it is an opportunity to get together and represent our community. 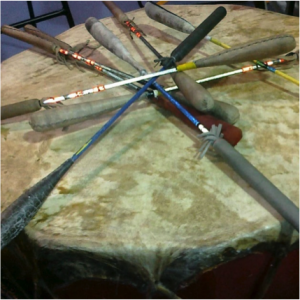 The drum is a central element of pow-wows