What did we eat when there were no grocery stores? What has changed in our diet? Before, our ancestors found all their food in the woods. Their diet was centred on meat in the fall and winter and fish in the summer. To preserve these, meat and fish were dried or smoked and kept in caches.

During the summer, small fruits and some wild vegetables were eaten, such as tubers, water plants, blueberries and cranberries (atocas). In winter, moose were an important source of protein, but other animals were also hunted and trapped (partridge, rabbits, etc.). All parts of the animals were used: skin and meat, of course, but also ears, snout, etc. The bones were used to make broth, tools, or toys. 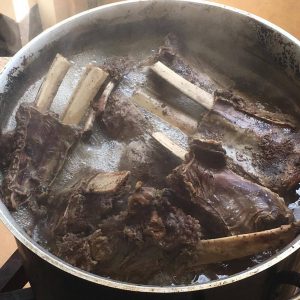 With colonization, the diet was transformed. In the trading posts, we obtained flour, sugar and other products in exchange for furs. With these new foods, we adapted our cuisine.

Jean-Paul G. says: “Chief Ignace Papatie did some farming. He grew potatoes, carrots and tomatoes. He shared his crops, but he didn’t have much.”

Today, although food comes mostly from the grocery store, some people still hunt, fish, trap and gather. Forest resources are not as abundant as they once were and are sometimes difficult to access. The animals that we get are sometimes sick because of pollution and exploitation of the territory. 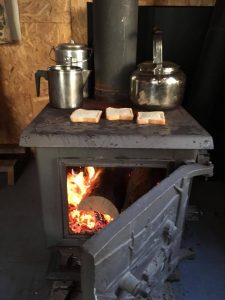 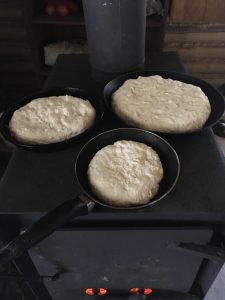 Two things have not changed: sharing food over a large meal and showing hospitality by serving tea (nibicabo).

Kokom P. says: “There was always tea to drink and offer to visitors.”