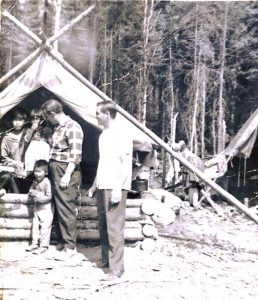 When a family stayed in one place for a long time, they sometimes built a cabin called a misasomikwam. This is what happened when the community settled “down the hill” with houses without electricity in the early 20th century.

Jean P. says, about the houses on the other side of the lake, “Some houses were made of logs and others of planks. The planks were taken from Senneterre where there was a sawmill that allowed the Anicinabek to take the planks that they did not consider adequate.”

It wasn’t until the 1960s, with the move up the hill, that we started living in modern homes. We had to adapt to very different ways of living (such as the indoor toilet). A course was given to about 20 women from the community to teach them how to run a house in the manner of non-indigenous women. For example, they learned how to make curtains. 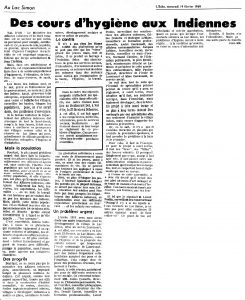 Today’s houses cost much more to maintain than a migwam.

The first furniture in the houses built “up the hill” was not handmade. Some chairs, tables and beds came from Amos residential school that had closed its doors.