This collage was compiled by Beth Cruise, BC Black History Awareness Society.

Their story is unlike any other story in Canada. As the Fraser Gold Rush was heightening, the British desperately needed settlers and they needed them quickly, settlers who could help to cement Victoria, the capital of the Colony of Vancouver Island, as a British administrative, business and mining hub, thwarting any attempts by the Americans to assert territorial authority.

This exhibit reveals how a group of about 800 Black immigrants, invited to settle here by Governor James Douglas, helped to stabilize British colonial communities and keep this area of Western Canada from American hands. At the time of this migration, the province of British Columbia, as we know it today was made up of the Colony of Vancouver Island and the Colony of British Columbia. James Douglas was the Governor of both colonies.

After their arrival, Douglas’ involvement and support largely waned, leaving the Black pioneers to rely on their own industry, character and ingenuity to make a life for themselves and their families.

These Pioneers were educated and skilled, became community leaders, business leaders, ministers, school board trustees and teachers.  In the course of making a life in the area, the Black pioneers were an important part of the development of civic society and commerce.

The majority came from the western states where they were facing restrictive government legislation, ambivalence towards slavery and beatings, insults and legalized injustice. Even free Blacks were denied citizenship.

This story shines a light on the opportunities, struggles and achievements of these men and women.

One key goal for the BC Black History Awareness Society is to stimulate children’s interest in history and an interest in their own culture and history.  In this video, children of members of our Society introduce you to a few of the pioneers you will discover in this exhibit.

Bricks and Mortar “classroom” (captions available in both French and English). View this video with an English transcript. 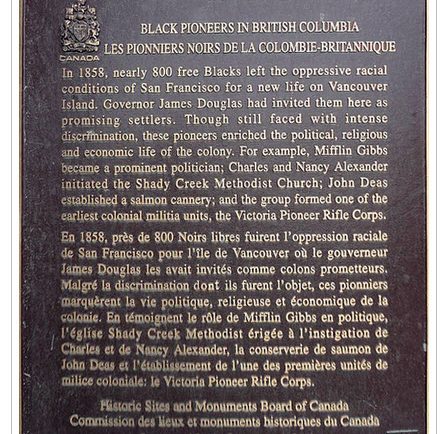