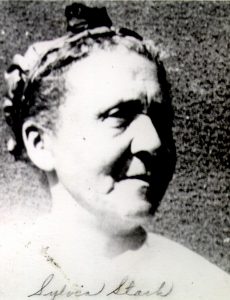 Sylvia Estes Stark was born into slavery in Clay County Missouri, in 1839.  She was the youngest of three children of Hannah and Howard Estes.

“Sylvia’s first memories were of work. Her mother had her drying dishes.  Sylvia would stand on a chair with her mother’s apron tied around her neck. Life for the children of slaves was not safe. They did not play outside for fear of being kidnapped and sold.”

Sylvia taught herself to read. “When their master’s children did their homework, she would listen. When they went out to play she would practice by herself. Mrs. Leopold would have been very angry if she had known as it was against the law to teach a slave.”

In 1849, her father was sent to California to work in the gold fields with the promise that he would be able to buy his family’s freedom papers. On November 14, 1852, Sylvia was emancipated along with her father, mother, and brother Jackson. Her sister Agnes had died in 1851.

The Estes family went to California looking for freedom; living there for about 9 years.  Louis Stark was their neighbour, and he married Sylvia in 1855. She was 16, and he was probably over 40.

In 1859, Sylvia sailed north on the steamship Brother Jonathon with her three-year old daughter Emily Arabella and baby Willis Otis along with her parents and brother, while Louis drove 50 of his best cattle overland to meet them.

Sylvia was one of the first non-Indigenous women to set foot on Salt Spring Island. Her new home was a rough and remote cabin on 200 acres near Vesuvius Bay. Wolves and cougars, communicable diseases, crippling injuries, lawless neighbours and poverty were the dangers they faced. When their hired hand, Giles Curtis, and soon after their neighbour, William Robinson were murdered, Louis moved his family to the opposite side of the island to Ganges Harbour. 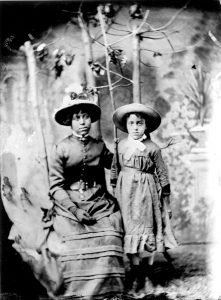 Circa 1890. Youngest daughters, Marie about age 23 and Louise Stark, about age 11

Despite the success of their island farm, in March 1873, Louis moved the family again; to a farm in the Cedar area near Nanaimo, on Vancouver Island. However, after a few years Sylvia returned to the farm on Salt Spring Island; managing the island farm with her son Willis.  Louis died mysteriously at his Nanaimo farm in 1895.

Sylvia on her front porch wearing her apron and with a garden hoe in her hand. “I want people to know I’m a working woman” Sylvia Stark circa 1930

When Sylvia’s daughter Marie was in her nineties, she wrote the history of her family. It was published in The Gulf Islands Driftwood newspaper as an 11-part series in 1979-1980. 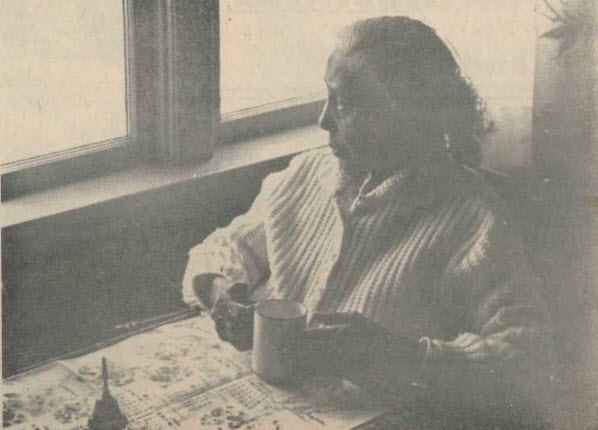