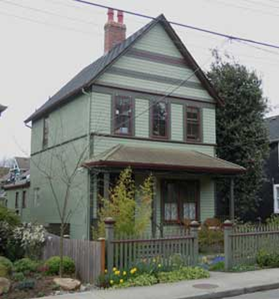 The restored home of John and Charlotte Dandridge, Victoria, B.C.

John and Charlotte Dandridge arrived in Victoria in 1858.  John was a waiter in the 1850’s when they lived in Buffalo, New York, but little else is known of their lives before coming to Vancouver Island. John did apply for citizenship but is listed as having no occupation.

In 1860 John joined the Victoria Pioneer Rifle Corps and in that same year their daughter, Sydna Edmonia Robella, her husband Abner Hunt Francis and their daughter Theodosia, age about 16, came to Victoria.  This house was built in 1862.  It is thought that Sydna and Abner helped to finance the building of that home.

Charlotte died the following year  on March 7, 1863 at her home. She is buried at Pioneer Square Cemetery in Victoria. It is not known what happened to John but it is assumed he returned to the United States.

In 1865 the son-in-law Abner is noted as having a mortgage on this property; he and Sydna struggle to make a life for themselves in Victoria.  In March 1872, age 59,  Abner passes away. He too is buried at Pioneer Square. In June 1872 Sydna sells the home and continues to live in Victoria until her death on May 11, 1889. Sydna is buried in the Ross Bay Cemetery in Victoria. There is no mention of her daughter Theodosia.

The current owners Davyd and Linda tell us  “The realtor told us that it had been built in 1899. Davyd, who does heritage restorations, recognized it as mid-19th century. After researching through city archives we found that a fellow named John Dandridge built the house in 1862 at the corner of Johnson and Vancouver Streets.” 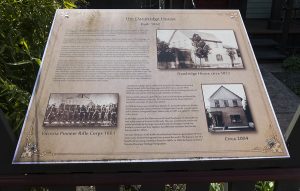 In 2006, after being meticulously restored by the current owners they won both Hallmark Society and Heritage Society of BC awards for their work.  In  February 2014  the plaque that sits at the fence was installed “so that everybody who walked by would appreciate just what this house really meant.  We feel we are stewards of this significant monument and historical site” Linda.

In this video Davyd and Linda talk about how the house was originally constructed.

The House that John Built (captions available in both French and English). View this video with an English transcript.

Davyd McMinn and Linda Carlson, current owners.  Valin Marshall, BC Black History Awareness Society, worked with Davyd and Linda in 2013/2014 to research the story and unveil the plaque.

The Cougar Hunter and the Mineralogist: Willis and John Stark, Brothers The Victoria Pioneer Rifle Corps