Born a slave in Tennessee in 1823, Willis bought freedom for himself and his family and then built a life for them in the British Colony.  In the summer of 1858 he arrived in Yale B.C. He and a Yorkshire man, Harrison, whom he had met in California, built a ditch supplying water for the mining operations but by the fall Bond was in Victoria.

In late 1858 “Bond & Co. Auction and Commission Merchants” were advertising regularly in the Victoria Gazette.  His next business venture, beginning in the summer of 1860, was as a General Contractor. 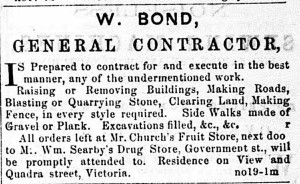 He worked for private individuals and he bid on and won about 16 municipal contracts, in one instance outbidding the competition by 50 cents! The Municipal Street Committee contracts awarded to Willis Bond ranged from $8.00 to repair a culvert at Douglas and Humboldt Streets up to $435.20 to install a drain from Government to Johnson Street. 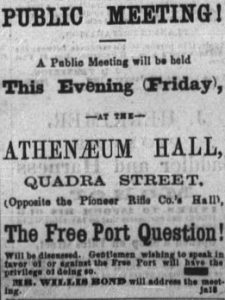 In January 1865 Willis Bond placed an announcement in the newspapers “ATHENAEUM HALL.  The Indefatigable Willis Bond is about to open a hall on Quadra street, between Fort and View streets which is to be devoted to public uses, such as political meetings, debates, &c.” Upon establishing himself as a public speaker, Bond was now called upon as the Master of Ceremonies at public events, and he became a well-known and respected orator.

And, yes, Willis Bond had many encounters with the police and legal system, yet his undertakings in the  Colony ably support his characterization of himself as indefatigable.  Crawford Kilian, noted author, describes Bond as “a solid middle-class entrepreneur”; and  David W. Higgins, who became editor of the  British Daily Colonist newspaper in 1866, described Bond as “the cleverest man, white or black, that I have ever met”. 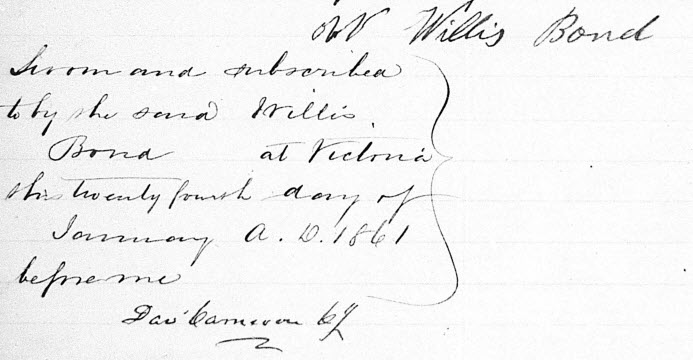 There are no known photos of Bond but this is his signature for the Oath of Allegiance to the British Colony on January 24, 1861.

On his death, December 22, 1892, his obituary said “For several years he wielded the auctioneer’s hammer with ability and considerable profit embarking later in business as a contractor. Blessed with a ready tongue and never failing good humor, his frequent appearances on the debating platform were well received.  He made many friends whose good will he retained until his death.”   Willis Bond was survived by his wife, son and daughter.  The obituary was reprinted in the Victoria Times Colonist on January 31, 1954 in an article about early days in Victoria.

Crawford Kilian “Go Do Some Great Thing: The Black Pioneers of British Columbia”, Commodore Books 2008;
D.W. Higgins “The Mystic Spring and Other Tales of Western Life” 1904 pg. 30, 89.   In 1860, David Higgins joined the staff of The British Colonist as editor but soon left to launch is own paper, the Victoria Daily Chronicle. In 1866 When the Colonist was sold, Higgins bought it and merged it with his Daily Chronicle.  This merger led to the formation of the Daily British Colonist.;
James Nesbitt “Old Homes and Families” Victoria Daily Colonist, January 31, 1954.