The Old Red Shirt
A miner came to my cabin door,
His clothes they were covered with dirt;
He held out a piece he desired me to wash,
Which I found was an old red shirt.
His cheeks were thin, and furrow’d his brow,
His eyes they were sunk in his head;
He said that he had got work to do,
And be able to earn his bread.
He said that the “old red shirt” was torn,
And asked me to give it a stitch;
But it was threadbare, and sorely worn,
Which show’d he was far from rich.
O! miners with good paying claims,
O! traders who wish to do good,
Have pity on men who earn your wealth,
Grudge not the poor miner his food.
Far from these mountains a poor mother mourns
The darling that hung by her skirt,
When contentment and plenty surrounded the home
Of the miner that brought me the shirt.
… Rebecca Gibbs 1869

Very little is known about Rebecca Gibbs.  She was born in Philadelphia in 1808 and more than 50 years later she is  listed in the Victoria Real Estate Directory 1864 as owning property on Fort Street.  She was married to one of Mifflin Gibbs brothers, Robert or Isaac, but the ancestry records are not conclusive.

In Barkerville she worked as a laundress; but was one of many who lost all her possessions in the Barkerville fire, September 16th, 1868, in which the town was all but destroyed in a few hours. Rebuilding the town began immediately and Rebecca was one of the first to rebuild. 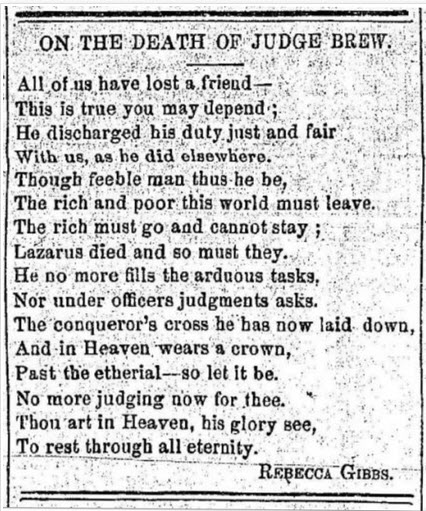 “On the Death of Judge Brew” by Rebecca Gibbs. Published in the Cariboo Sentinel on June 11, 1870.

Rebecca wrote a poem about the Barkerville Fire and this poem about Judge Chartres Brew who died on 31 May 1870, considered a man of courage and fairness with a humane heart.

These three poems were all published in the Cariboo Central, but no other poems have been discovered and it is not known what prompted her to write these poems. 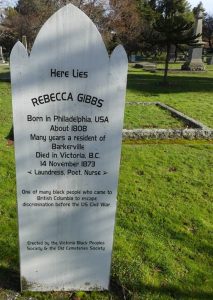 She lived in Barkerville until the early 1870’s, then returned to Victoria. Her death certificate says she died of bronchitis on November 14, 1873 at the age of 66.