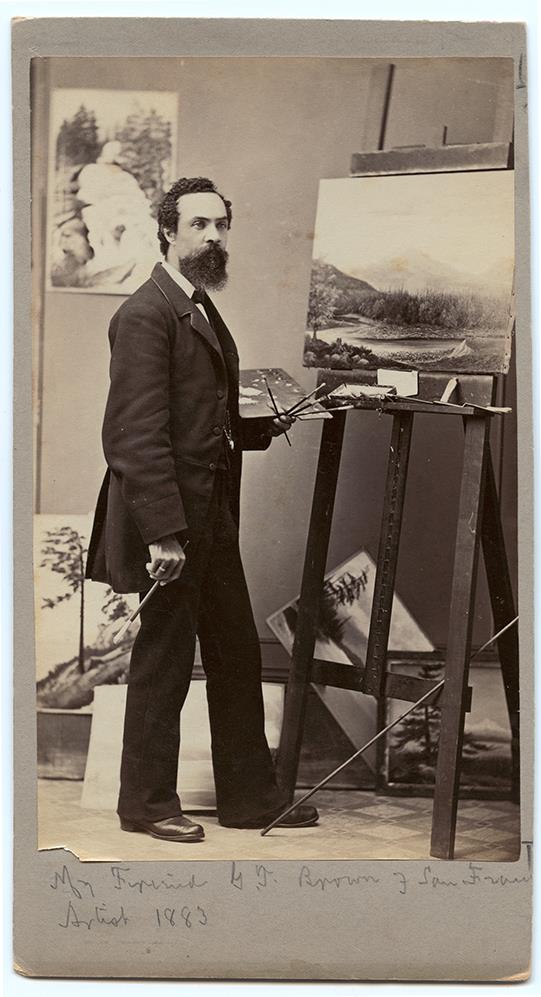 Grafton Tyler Brown in his studio in Victoria (British Columbia), 1883.

In 1882 Grafton Tyler Brown, a San Francisco lithographer joined a geological survey party travelling through the lower British Columbia mainland.  On November 28, 1882,  an article was published in the British Colonist. “The Great Interior on Canvas.  Mr. G.T. Brown an artist of more than local celebrity in California and elsewhere passed through Victoria and joined Mr. A. Bowman’s geological survey party.” The article encourages a visit to Brown’s studio at the Occidental Hotel; and “His opinion is that this province may challenge the world for magnificent and picturesque scenery”. 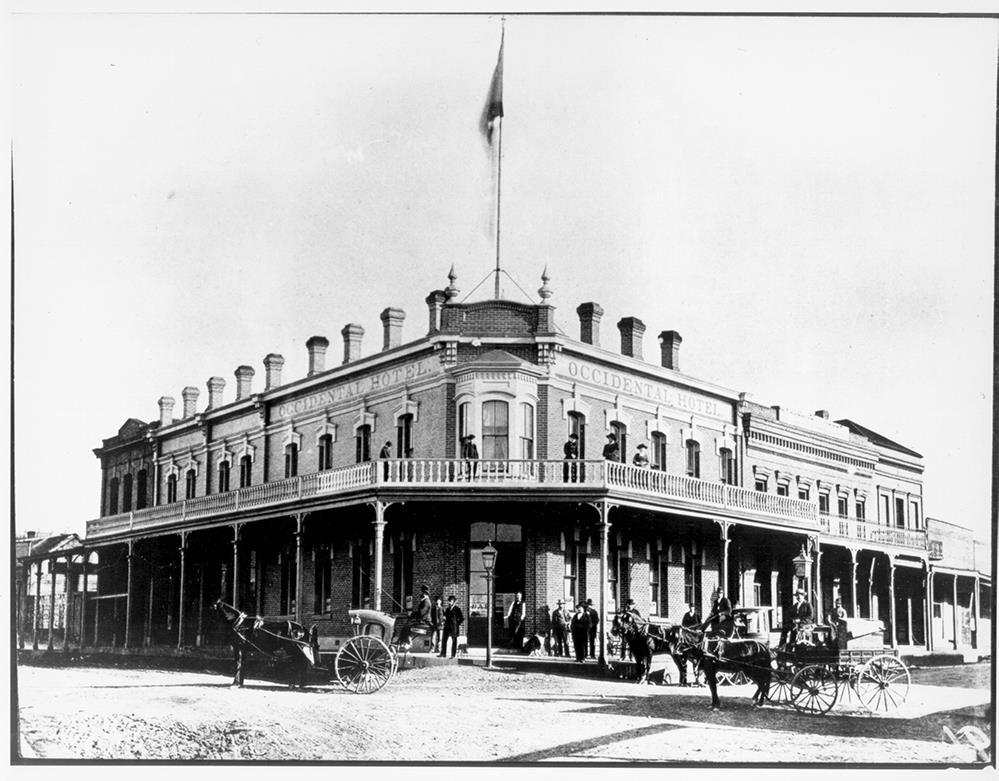 Brown’s studio was at the Occidental Hotel, Victoria; at the corner of Store and Johnson Streets. This photo was taken circa 1866.

In San Francisco, Brown worked for Charles Kuchel producing panoramic views of towns as well as homes and properties of prominent citizens; which were lithographed and sold.  By 1875 Brown had his own business “G.T. Brown and Company. One of his commissions was for salmon can labels for John Sullivan Deas, the Black entrepreneur who, in 1872, operated one of the first salmon canneries in B.C. 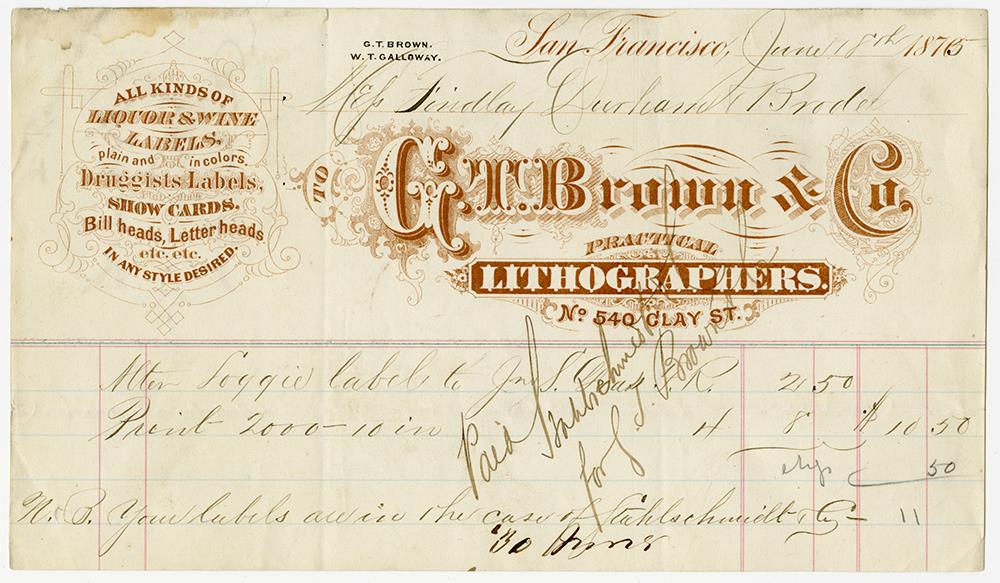 Invoice for salmon can labels from G.T. Brown and Company.

In the summer of 1883, after spending several months with the geological survey team Brown held an art exhibition.  The day after the show a newspaper article stated: “Yesterday was the opening day of the exhibit from the brush of our local artist Mr. G.T. Brown. The scenes portrayed are 22 in number comprising views of Victoria, surrounding area and the mainland. Several of the paintings have been already sold”.

In 1886 Brown returned to Portland and opened his own studio.  A final career change in 1892, Brown worked as a draughtsman for the U.S. Army Engineer’s Office.

Brown’s work endures. This painting “Giant’s Castle Mountain” was purchased by the Royal BC Museum and Archives and Friends of the BC Archives in March 2018 to add to their collection of his work. 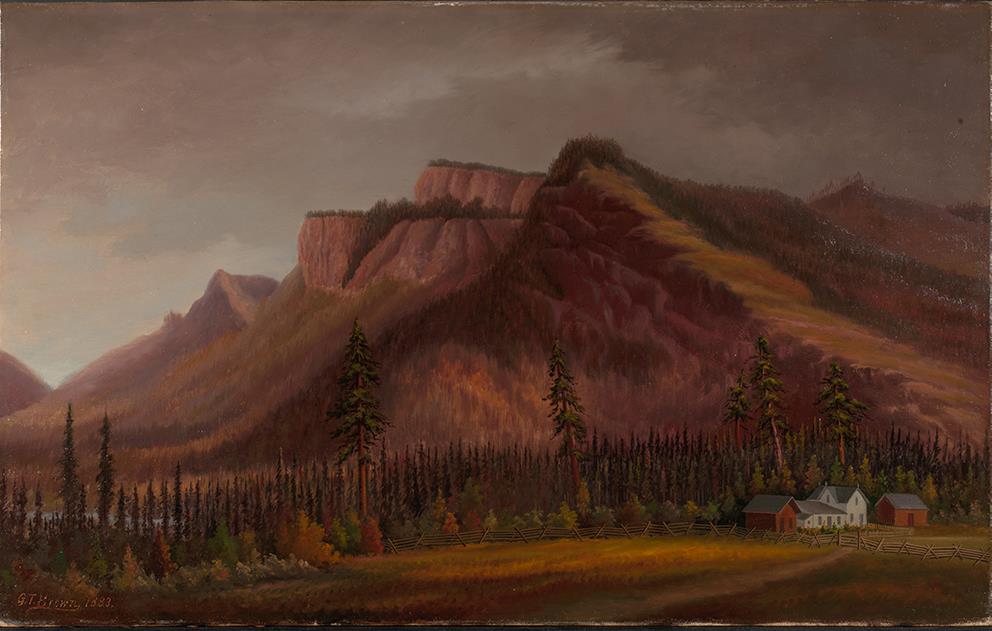 Dr. John Lutz, History Department Chair, University of Victoria says that Brown’s work is important because it shows us what the province looked like at a time when it was still largely an indigenous space, with a few settlers beginning to arrive. This particular painting is especially notable because it shows the then new homestead of Alexander Leslie Fortune, which formed the nucleus of what is now Enderby, B.C. at the head of navigation on the Spallumcheen River. What is now Enderby Cliffs Provincial Park is shown in the background. Fortune was one of the Overlanders of 1862, aspiring gold miners who pioneered a route to BC through the Rocky Mountains.