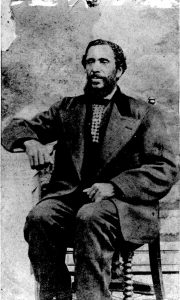 Howard Estes was born enslaved around 1809 in Clay County, Missouri, USA. As was the custom for those who were enslaved,  Howard was assigned the last name of his owner, a Scotsman named Tom Estes. Howard Estes lived apart from his wife Hannah and children Sylvia, Jackson and Agnes, who were slaves of Charles Leopold, a German baker.

Freedom did not come easy. From the “History of the Stark Family” we learn that in 1849 when the California gold rush was on, livestock was in great demand. Tom Estes was sending cattle to California. Tom’s two sons and Howard went as herders and Tom made a contract with Howard, agreeing to give Howard his freedom papers on receipt of $1000.00, allowing him the ‘privilege’ of making the money in California. Howard worked in the gold mines, made the money, but  Tom refused to give Howard his free papers.

Unwilling to be thwarted Howard made another $1000.00, sending it directly to Charles Leopold. When Tom Estes heard about it, he claimed that money too, on the grounds that Howard was his slave. Leopold contended that Howard was in a free state, and therefore a free man. Tom then sued Leopold, was awarded $800.00, but was forced to relinquish Howard’s free papers.

Finally, at a cost of over $4000.00, an enormous sum at that time; Howard bought freedom for himself and his family. 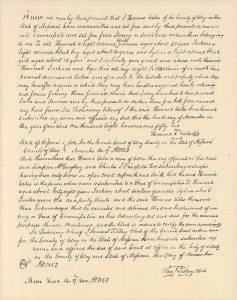 Deed of Emancipation submitted by Howard Estes to the Clay County, Missouri Circuit Court on 10th of November 1852

Their emancipation was granted on November 17th, 1852.

The Estes family bought a 40-acre Missouri farm.  Harassed by the Ku Klux Klan; the family headed west by way of the Oregon Trail for California then in 1859 came to Vancouver Island in response to the invitation from James Douglas.

Howard purchased 125 acres of farmland in what is now Central Saanich.  “He owned twenty-one head of cattle, eighteen pigs, twenty-four chickens and turkeys, one wagon and harness and one plow.”  author John G. Fitch, Professor Emeritus, University of Victoria.   He lived there with his wife Hannah and son Jackson; then selling the farm in 1867 to Thomas Michell along with livestock and farm equipment.

The Michell farm is still operating.  Sometime after his wife died, Howard Estes moved to Salt Spring Island and lived out his days with his daughter Sylvia and his grandchildren.

He died in 1892, around the age of 89, while fighting a forest fire. He is buried at the Ganges Community Cemetery, Salt Spring Island.  His daughter Sylvia and grandchildren Emma, John and Willis are also buried here.