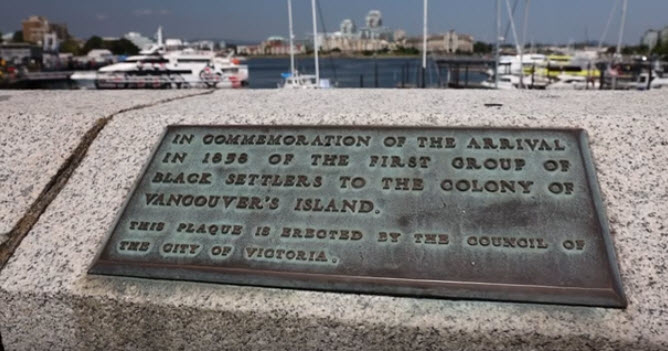 The goal of the Pioneer Committee was to confirm that this British Colony was, as promised, a place where they could live without fear and live with equality under the law.  This plaque was installed by the City of Victoria on August 18, 1978.

The San Francisco Black community were well organized through the First African Methodist Episcopal Zion Church (established in 1852), working together to overcome the civil, business, labor, and legal injustices they faced daily.

On April 14, 1858 many Blacks were gathered at this church, celebrating the court decision to release Archy Lee, a fugitive slave.

In the midst of these celebrations, Jeremiah Nagle, captain of the steamship Commodore, which sailed regularly between San Francisco and Victoria, arrived at the meeting.  Nagle had a letter from “a gentleman in the service of the Hudson’s Bay Company of undoubted veracity, giving details about the colony and welcoming the Blacks.    The meeting was spirited, Nagle answered many questions”.  Quote Credit: Crawford Kilian, “Go Do Some Great Thing: The Black Pioneers of British Columbia”.

The church decided to form a committee to meet with Governor Douglas. They sailed from San Francisco on April 20, 1858 aboard the Commodore. On April 25, 1858 the Pioneer Committee of 35 African-Americans arrived in Victoria. A delegation of three met with  Governor Douglas, Fortune Richard, Wellington Moses and a Mr. Mercier.

Mercier returned to San Francisco reporting “Governor Douglas had made them feel welcome, and the delegates’ meeting with him had been very cheerful and agreeable” Crawford Kilian.