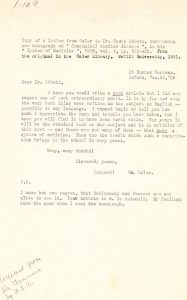 Maude Abbott was fascinated by pathological specimens. After discovering the “Holmes heart” in the McGill University Medical Museum collection, she decided to publish an original report on it in the Montreal Medical Journal in 1901.

“I republished the 1823 article with a description of the heart, and a little biographical sketch of Dr. Andrew Holmes. This was a remarkable cardiac anomaly, an adult heart with no ventricular septum, but a small supplementary cavity at its right upper angle, giving off the pulmonary artery.”

“The other very important outcome of my early article on the Holmes heart was that in 1905 Dr. Osler invited me to write the section on Congenital cardiac disease in his new System of Modern Medicine.” 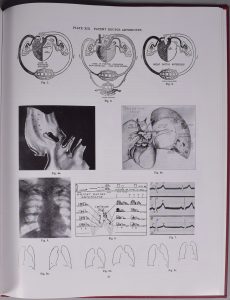 Osler encouraged Maude to publish the results of her research. Having always had faith in her abilities, Osler wrote in 1908:

“I knew you would write a good article but I did not expect one of such extraordinary merit. It is by far and away the very best thing ever written on the subject in English… possibly in any language.”

She catalogued and analyzed 412 cases. “I had a large mass of facts and figures from which to draw conclusions.” 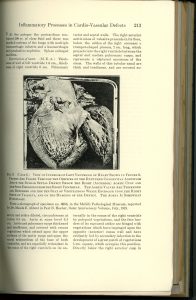 Heart specimen in an scientific publication by Maude Abbott

A woman in a male profession A prolific author