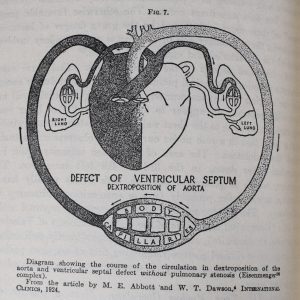 Maude Abbott returned to Montreal in 1897 at the age of 28. The situation of women in medicine had changed, and there was now greater openness and recognition. Dr. Abbott opened a private practice on Mansfield street near McGill University and enjoyed a good relationship with her medical colleagues at the recently opened Royal Victoria Hospital. At the request of McGill professor Dr. C.F. Martin, she conducted research and published a paper on functional heart murmurs. “This paper, ‘On so-called functional heart-murmurs’, was presented for me at the Medico-Chirurgical Society by Doctor James Stewart, as I was not a member and women were not accepted in the Medical Society.” 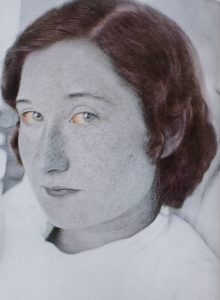 Maude’s first academic paper impressed the medical community and gave rise to a sudden, unexpected interest in her work. A short time later, a resolution proposed by Dr. George Adami was adopted almost unanimously by the doctors of the Society. On March 21, 1898, Maude Abbott became the first woman to be accepted in the Montreal Medico-Chirurgical Society.

A second publication on a case of pigmentation cirrhosis known as Blue Mary (the first case of bluish pigmentation of the skin observed in a woman) earned Maude Abbott international recognition. The results of her research were once again presented by a man, but this time, to the prestigious London Pathology Society. Maude took great pride in this achievement: “It was the first communication ever made by a woman presented before that Society.”

After returning to Montreal, Maude Abbott excelled in a medical community entirely dominated by men. Her reputation grew as she gained respect and recognition for the quality of her work and her scientific skills.

Maude in Europe McGill at last