In the past, the Chief’s office or his public information officer… would say, “Two guardsmen, that’s it.” By moving to this new model, we can decide what’s an appropriate response from the Honour Guard.

The Honour Guard is supported by the CFD as an arms-length organisation, and exists outside of the traditional command structure. A self sufficient organisation, the Guard takes responsibility for sorting their own unit’s transport, time off, and finances.

Commander
Instead of a Chief, the Honour Guard is led by a Commander. The Commander is responsible for the day to day running of the organisation. This includes communicating with the CFD administration and the Public Information Office. 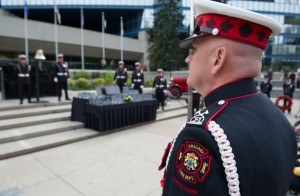 Adjutant
The Adjutant performs several important duties for the Guard. The role includes responding to callout requests, allocating events and arranging time commitments, all central to the Guard’s efficient running. 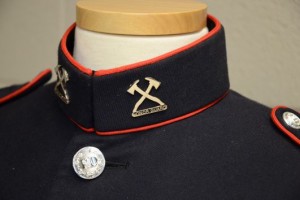 Quartermaster
The Quartermaster takes care of the inventory and outfitting of members. The Guard uniform has great ceremonial value, and its maintenance is a hugely important task.

Sergeant at Arms
The Sergeant at Arms instructs drill to the members, and looks after the current drill manual. They also set the ceremonial dress requirements for events.

Finance Officer
The Finance Officer manages the budget and accounts of the Honour Guard, monitoring travel funds, expenses and outgoings to ensure the Guard runs smoothly.

Operating Officer
The Operating Officer assists with the organisation and arrangement of events, particularly large scale requests. Generally, the Adjutant takes care of these duties, but when demand requires the Operating Officer will take over with the fine details of planning in a collaborative effort. For any given event, this could include flights and accommodation, funding, or practical elements such as tents and refreshments at large scale memorials.

Functions of the Honour Guard Recruitment