It’s a very recognizable unit and legacy of the Fire Department. Being a founding member, I’m quite proud of that.

On September 6th 1970, Lieutenant Lloyd Dutnall died fighting a blaze at the Calgary Stockyards, and became the fourth firefighter to lose his life on active duty. 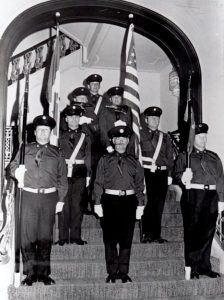 After his funeral procession, firefighters were furious that the department had represented itself so poorly during the service, especially in comparison to the parade skills of the police. A group got together to discuss plans for a more precise, military-inspired Honour Guard. They aimed to represent the fallen with more dignity, and cast CFD in a better light. The first meeting took place on October 1970, with John McNeil, Don Lindbergh, Brian Freney and Dennis McIvor in attendance. Planning led to some heated discussions with CFD leadership, who told the group that ‘not in their lifetime’ would the Fire Department have an Honour Guard!

That changed in the summer of ’71, with the arrival of the Canadian Association of Fire Chiefs convention. After months of trying, the original members finally got their wish. They formed the Guard to officially represent Fire Chief Charles Harrison for the occasion. 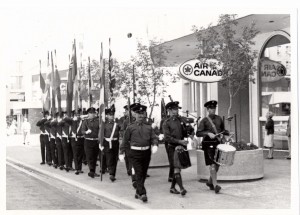 On August 23, 1971, the newly formed Honour Guard showed off its skills on the march into Palliser Square.

Today the Calgary Fire Honour Guard has over 30 volunteers representing their past and present colleagues at special events throughout the year.

View this video with a transcript: Brian Freney