I felt that joining the Honour Guard would really be a way of saying thank you to not only the firefighters with the CFD who have given so much, and done so much, for this community, but also to my family…who have served in the Canadian Military. 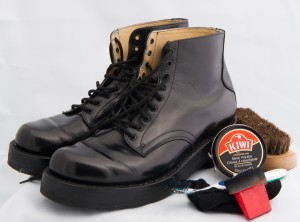 The Honour Guard has paramilitary roots, replicating the order and training shown by troops. Brett Romanow maintains family traditions of military service through Honour Guard service, while also paying tribute to a fire department that does so much good work for the community.

Brett’s grandfathers served in World War Two. His service offers a way of paying homage to them, and all armed and service personnel, in these more peaceful times. As the Adjutant on the Executive Committee, Brett organises the Guard’s schedule, responding to events and arranging attendance.

One of the ways in which Brett, and all Honour Guard members, pay tribute is through care and respect for the uniform. In his case, the boots offer a potent symbol of that respect. Immaculate presentation is expected at all times, and is immediately noticeable by the general public. This shows the public just what it means to him to be a member of the department. Polishing the boots offers time for reflection, on colleagues and calls that have gone wrong, and the risks of protecting the community.

View this video with a transcript: Brett Romanow