Lots of people realise that there’s not that many workplaces now where you’re remembered after you retire, to that degree. Where there’s that kind of presence at the end of your life. 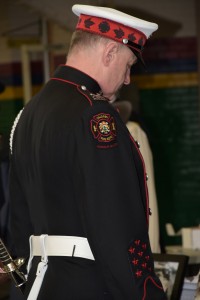 A moment of reflection.

The display of dignity and respect at departmental funerals inspires some firefighters to apply for the Guard to continue their traditions.

Whether the funeral of a retired member or a current colleague, departmental memorials serve as a reminder of the risks of the job. While many firefighters live to see old age, some are less fortunate. Their sacrifice deserves to be remembered and respected, and the Guard takes great pride in preserving their memory.

As well as being widely respected in the local community, the Honour Guard has a high reputation across Canada. The knowledge and organisational skills of the Guard has been called upon to assist with line of duty funerals in other communities. 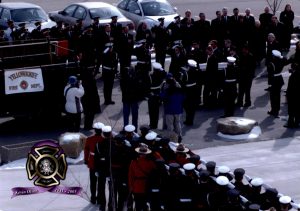 The 2005 death of Kevin Olson in Yellowknife shocked his local community. Kevin and a colleague were killed as a roof collapsed on top of them during a call, becoming the first line of duty deaths experienced in the city. The CFD Honour Guard was asked to attend, and helped arrange the funeral procedure and procession. Olson, a Calgary native, was laid to rest in his home town. The citizens of Yellowknife came out in full force to pay their respects to him during the funeral procession.

At these times, the Guard can assist in any way required, taking great care not to step on the toes of colleagues and only providing guidance when needed. It’s crucial to remember that the event is about the deceased, not about the Honour Guard. This lighter touch, and the willingness to be a sound board for ideas, makes the CFD Honour Guard frequent collaborators.