We’re a body of people who represent everything about the Calgary Fire Department. Whether it’s the Chief at some functions, right the way through to the frontline members of the organization who are out there every day.

Calgary Fire Honour Guard at the base of the Husky Tower, August 23rd 1971.

If you asked every member of the Honour Guard what their main function is, you’d probably get thirty different responses. They’d range from honouring the fallen, to representing the CFD, and giving thanks to their predecessors. 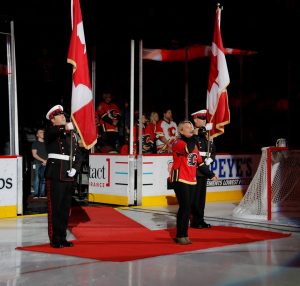 The Honour Guard aim is to represent and remember the fallen, and serve their memory with respect. It’s a way of giving back to those who have served the community with distinction for such a long time. Its precision and traditions are a spectacle that shows the families of the fallen that their loved one continues to be appreciated, and will always be a part of the profession.

The Guard’s principles date back to the military traditions of the fire service. These struggles and sacrifices are too easily forgotten in the modern day. The visible displays of professionalism help people to take an interest in the fate of the Fire Department, outside of the trauma of fire and disaster. 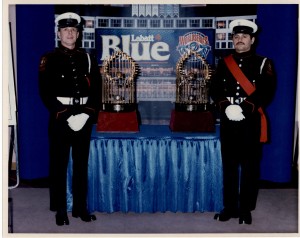 When the silverware arrived in Calgary, they were kept in residence at City Hall.

The most emotional events today involve firefighter memorials across North America. Firefighters see themselves as part of a huge fraternal community. These memorials give them the chance to mourn their colleagues together.

The Guard also appear on behalf of the department at public events, regularly representing colleagues at civic and community celebrations in the city of Calgary.