Instead of the “Challenge Coin”, I want to actually reflect what that coin’s true purpose is, which is the constant memorial in one’s pocket of the sacrifice. 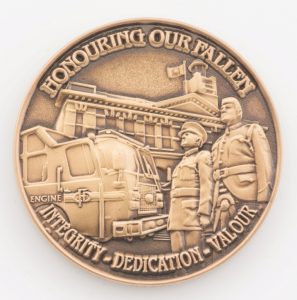 The Memorial Coin
The Honour Guard began handing out the CFD Memorial Coin in celebration of the 125th Anniversary of the Department. The coin shows the organisation’s insignia and is presented to all firefighters following the completion of their probationary period. The challenge tradition ensures that members are carrying their coin, and dates back to World War One. When challenged, members must be able to present their coin or suffer a forfeit. If they do, then the challenger forfeits instead! Its permanent presence in the pocket of a firefighter serves as a reminder of the vows taken to serve and protect the community, and the collective spirit of the department.

Axes and Swords
The axe is a worldwide symbol of firefighting, going back to the early days of the profession. Although modern day firefighters use high tech equipment to gain entry to buildings, the axe remains associated with the risks of the job. The Honour Guard carry ceremonial pieces. They are marked with the insignia of the unit, to respect the memory of those who served before and the long history of firefighting. 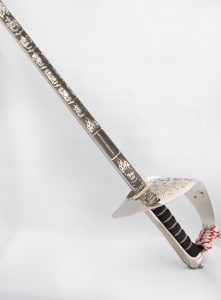 Ceremonial sword, showing the insignia of the Calgary Fire Department, the Honour Guard, and their relevant associations.

The sword links the military background of the Guard to the firefighting profession. The ceremonial piece is a reminder of the Guard’s origins, and a symbol of the professionalism of the unit. The inscribed names of the fallen nine links past and present. This acts as a reminder that tragedy can occur at any time on the job, and that their sacrifice should be constantly remembered. 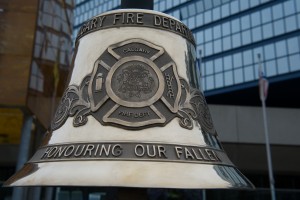 The ceremonial bell on display at the Fallen Firefighters Memorial at Tribute Plaza.

Ceremonial Bell
The Honour Guard bell is cast from melted CFD brass hose couplings. It is used most visibly at the City’s Fallen Firefighters Memorial. At the annual ceremony, the bell rings for every member to have lost their life as a result of their service. The death of a colleague was often marked by the ringing of fire bells across the city, and the sound of this tribute brings sadness to the hearts of firefighters across the world.

The Uniform The Fallen Nine