Alongside the ceremonial sword, the axe is a representation of the past. During the early days of the fire department, the axe played a crucial role and was a key part of the firefighters’ armoury. Although technology has progressed, the piece remains an important piece of kit, and is a worldwide symbol of the job. Each axe head features the name of a fallen colleague. During official ceremonies, the Guard uses them for ceremonial effect, in the same manner that the Armed Forces use rifles during drills and marches. 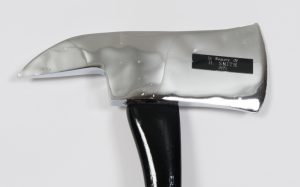 Close up of the axe head, showing the name of fallen firefighter Harold Smith.