In 1992, we stood guard for the Queen. We lined up, her limousine pulled up and she got out. She’s quite a presence. She certainly has an aura about her. 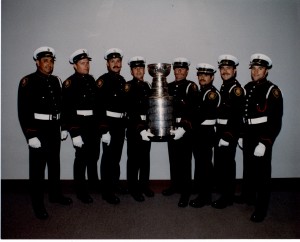 Firefighters often see the public at their lowest, under threat of disaster and facing huge anxiety. To avoid being associated with only the tragic, led the Guard to develop a number of community programs over the years, becoming prominent in civic life showing off another side to the job.

In the early years, the Honour Guard appeared mainly at internal events like conventions and memorials. Now you see them everywhere from flag bearers at Flames’ games, to marching in the Stampede Parade. They embrace their roles both as firefighters and guardsmen wherever they go and whatever they do. 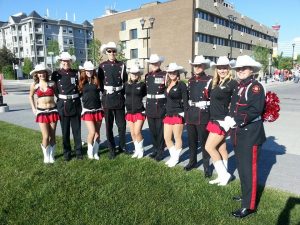 Honour Guard and the Stampeder Outriders, 2012

The number of these events expanded massively over the last few years, allowing the Guard to reorganize their time structure, and recruit new members to cope with demand. Extra funding from CFD paved the way, making it possible for the Honour Guard to continue representing the Department to the highest of standards.