They’ve got an excellent core of people there to run it, and keep it going, and it’s somewhat humbling to look back and say ‘yeah, that’s part of my legacy’. 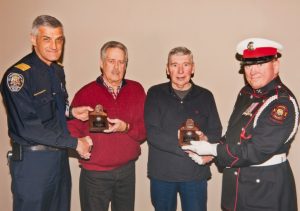 Brian and Dennis receive their commemorative plaques, in recognition of their work setting up the Guard.

Brian Freney and Dennis McIvor are at the heart of the Honour Guard’s history. At Lloyd Dutnall’s funeral in 1970, the Department’s performance at the memorial disappointed the two men. They proposed a ceremonial unit based upon military standards of drill and representation. Together with other former servicemen in the department, they created the Honour Guard as we know it today, starting a tradition of high quality representation and remembrance of all firefighters.

The road to creating the Guard was not always straightforward. The Department’s leadership rejected the initial proposals, and even once the Guard formed there were a number of restrictions.

Their dedication to representing the Department and its members with dignity never wavered. The pair took part in many of the early events for the Department, leaving a lasting legacy behind. Without the foundations laid by the first members, the Guard wouldn’t have the elite reputation it holds today. Their tales shed light on how the early Guard functioned, and some of the forgotten moments, such as how the unit rescued more than one official event with some quick thinking and ceremonial polish.

View this video with a transcript: Brian Freney and Dennis McIvor