The Honour Guard represented the Fire Department at the funeral, and it was kind of a tough one to do, but it was nice to see the, in the procession that we went to, the citizens stepped aside and stopped, and kind of paid their respects somewhat to Morley. 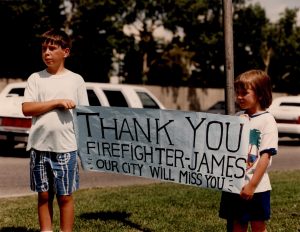 Morley James’ death at the Forest Lawn hotel fire in 1992 was the 9th active duty death. While attending the fire, James became disorientated and overcome by smoke and flames. Despite efforts from his colleagues, he was unable to escape the inferno. The investigation that followed determined that the fire had been set intentionally.

The outpouring of emotion from both the public and profession made a deep impact on everybody who witnessed it. James was a beloved friend and colleague to many firefighters, and his death left a hole in the Department. Thousands of people lined the processional route along Glenmore Trail to pay their respects. The Honour Guard led the pumper that carried his casket. Current Honour Guard members Captain Terry Larson and Chief Steve Dongworth were both inspired to join the Guard because of the dignity and emotion shown that day. 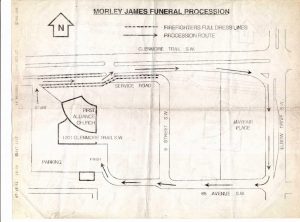 Line of duty funerals are the most difficult events for any member of the Honour Guard. Not only do they have to say goodbye to an esteemed member of the department, but also a friend. Even after all of their training, keeping their emotions in check and delivering the memorial takes a huge amount of courage and restraint. The ability to provide flawless service in these difficult times sets the Guard apart, demonstrating a level of courage that would be difficult for many colleagues.