As soon as we put on that Honour Guard uniform, you’re not an individual anymore, you’re representing the department and you support other departments, other firefighters in their worst time of their life 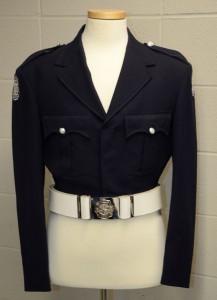 Wearing the uniform is not just a necessity of the job, it’s a privilege. The commitment to the uniform dates back to the military origins of the group, representing the long held links between the Fire Department and Armed Forces. The CFD Honour Guard hold the respect of their counterparts across the country, and their appearance is a key part of that.

Members consider the uniform the visible display of the Guard’s core values. Boots must always be polished, and the uniform always pressed. After their probationary year, Guard members receive their tailored uniform and branded elements used for travelling. The amount of history and dedication associated with the kit makes this one of the defining moments of their career. 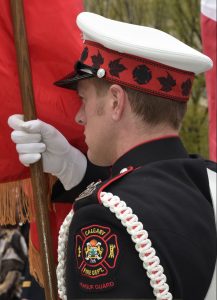 Close up of left shoulder patch, and additional elements.

The uniform consists of a formal black tunic, edged with red piping and a red vertical stripe down the side of the pant legs. The red signifies the “blood of the fallen.” Intertwined maple leafs honour the service to our country paid by many of our members. Nine stars adorn the right sleeve of the tunic; one star for each of the nine CFD firefighters whose lives were lost in the line of active duty.

View this video with a transcript: Why we shine our boots