Colorado was a really big deal for me, that’s the impetus that I had to join the Honour Guard. I thought, you know what, I want to part of this, officially. I want to be part of this and do my share, and give back to our, our organisation as well.

The death of a firefighter leaves a lasting mark on the entire profession. Memorials are an important part of the healing process. They allow firefighters and families from across the world to come together and mourn. 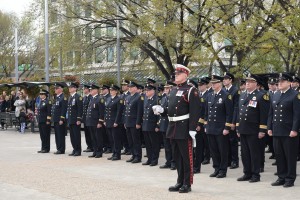 Locally, the Calgary Fire Department stages the Fallen Firefighters Memorial every September. The ceremony remembers the 9 active duty deaths, and 34 presumptive illness deaths, that have affected the CFD. The families of the fallen attend the event. Each name is read out, accompanied by the tolling of the bell. Prior to the ceremony, the Guard march from Mewata Armouries to Tribute Plaza, outside City Hall. 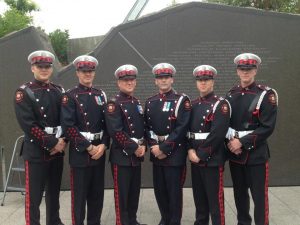 On a national level, the Canadian Firefighters Memorial takes place in Ottawa. The ceremony welcomes firefighters from across the country to pay their respects to their fallen colleagues and support their families. The names of each firefighter that have been added to the memorial roll is engraved onto the memorial. Their families are presented with a commemorative helmet. As one of the most prominent Guards in the nation, the CFD often have a central role in the event, giving them the chance to represent the CFD’s fallen on a national scale. The Guard brings bespoke Honour Guard cowboy hats to the memorial to be given as mementos to grieving families as a gesture of admiration and support. For children and loved ones, these gestures offer comfort and a bit of fun during dark times. 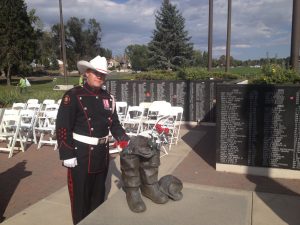 Finally, the International Association of Firefighters Memorial is held in Colorado Springs every September. Names are added to the memorial wall during the ceremony, in the presence of colleagues and family members. These memorials act as a reminder to the families that the profession will continue to look after them, providing a helping hand and a friendly face in their time of need. The Guard work hard to ensure that the families want for nothing during these memorials, whether it’s a cold drink, a conversation, or even a smile. The event also allows the firefighters from across North America to confide in one another and celebrate their achievements over a beer or a coffee, taking over the town for a weekend to celebrate their profession.