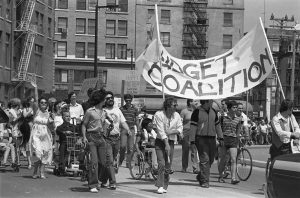 On July 23, more than 20,000 demonstrators marched in Vancouver to a rally organized by the Lower Mainland Budget Coalition.

On July 23, more than 20,000 demonstrators marched in Vancouver in a rally organized by the Lower Mainland Budget Coalition to oppose the government’s package. A week earlier, BC Federation of Labour President Art Kube predicted 3,000 would show up. The people of B.C. were ready to fight.

Audio with transcript: “Rally in Victoria – Joy Langan, BC Federation of Labour” 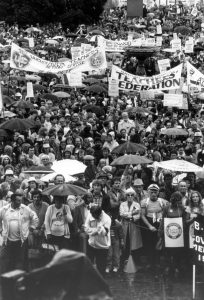 The largest protest ever held at the BC legislature in Victoria was on July 27, 1983. It drew twenty-five thousand angry citizens.

July 27, 1983 saw the largest protest ever held at the legislature in Victoria. Twenty-five thousand citizens expressed their widespread anger at the Social Credit government’s “restraint” budget as an excuse for stripping away labour and social rights.

Province-wide pickets appeared at government offices. Work-to-rule was used. Canadian clergymen called Bennett dishonest and unfair. The federal government, Vancouver City Council, and the BC Health Association all added their voices to the growing opposition.

Smaller actions also took hold across the province. 20 people in Usk in northwestern BC protested by blocking access to the ferry, the only link across the Skeena River. The Vancouver Sun reported that picketers held back until after the ferry operator got to work so his job would not be in jeopardy. 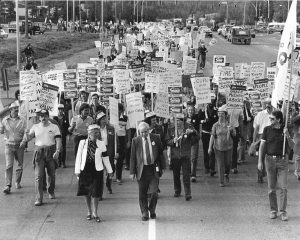 Solidarity demonstrations occurred in communities around BC. This march of protestors took place in Prince George on August 4, 1983 where 1,000 people denounced the government’s actions.

“We hope other communities will find their own way to fight back,” said an Usk protester. 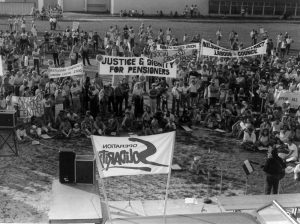 In the West Kootenay city of Nelson, community and labour representatives joined together to protest the provincial government’s 1983 budget and legislative package which attacked social and labour rights.

“Basic rights are being taken away from all British Columbians and the amendments don’t change that,” Art Kube told a rally of 2,000 in Nelson. Similar rallies were held in communities like Prince George, Kamloops, Kelowna, Williams Lake, Quesnel, Fort St. John and Dawson Creek. 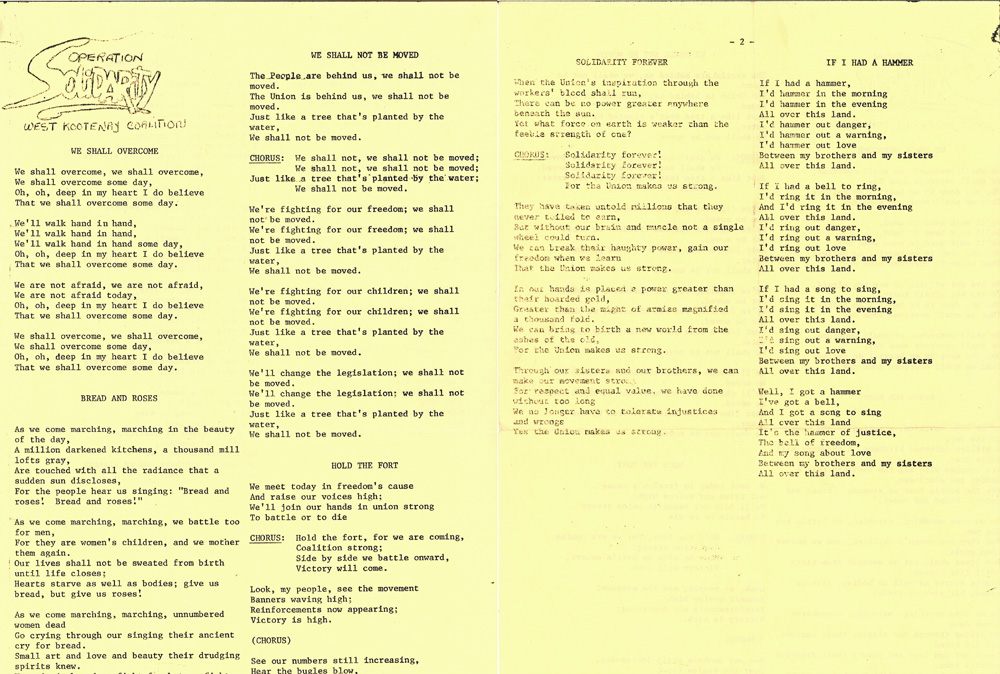 Music from historic labour and social justice movements were often part of the 1983 Solidarity events as shown in this song sheet from the West Kootenay Solidarity Coalition. The songs helped to build unity and comradeship among protesters.