The BC Federation of Labour Convention later in November saw delegates pledge their continued support to the community groups that felt so betrayed by the deal, but the promise felt hollow to many. 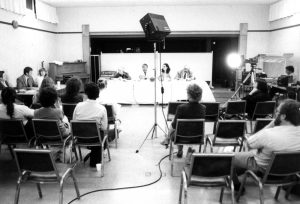 The Solidarity Coalition held its own round of consultations around British Columbia in 1984. In large and small communities public hearings were held.

The Solidarity Coalition continued to operate, determined to continue the pressure on the government to reconsider the additional bills. In 1984, they took the matter of consultation into their own hands with the People’s Commission, travelling around B.C. to hear community input on the legislation and budget. 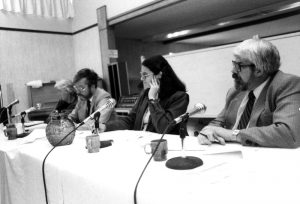 In 1984 the Solidarity Coalition formed the People’s Commission, travelling around BC to hear community input on the previous year’s legislation and budget. Commissioners seated left to right are Jane Evans, Mel Watkins, Rev. Margaret Marquardt and Ray Haynes. 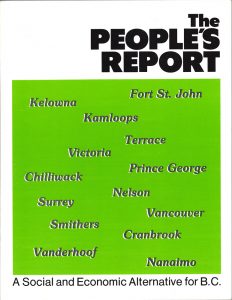 The People’s Report–published by the People’s Commission–was largely ignored by the government. It took input from communities across the province and reported their priorities for future governments.

The anti-climactic end to the Solidarity movement of 1983 tends to overshadow what was one of the most significant moments in BC labour history. The government was forced to back down on their attack on labour rights, and it was a formative time for the labour unions involved. Provinces across Canada watched and learned from the events in British Columbia.

Most importantly, it saw labour and community activists truly working side-by-side in new and exciting ways. For the many thousands of British Columbians who took part, they can look back with pride at being part of “a people’s movement that has come around only once in the province’s history.”