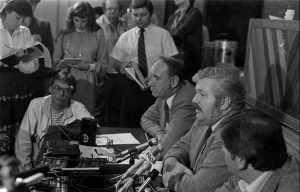 On July 15, 1983 the B.C. labour movement set aside any internal disagreements to unite under the banner of Operation Solidarity – a name and image inspired by the independent Polish union “Solidarność”, banned in 1982. 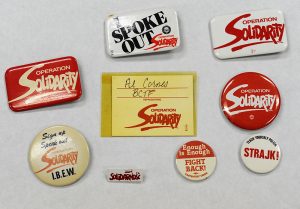 Red and white Operation Solidarity buttons echoed the independent Polish union “Solidarnosc” which had been banned in 1982.

A steering committee of the BC Federation of Labour executive council and “fair representation” from non-affiliated unions was given authority to call a general strike and a 1-million-dollar budget to fight the provincial government’s “restraint” budget. Though labour unions were divided over issues of international representation, raiding and more, they all appeared united and ready to work together, with many rank-and-file members eager to join the cause.

“I was 30 years old at the time of the Solidarity actions. I’d been a CUPE [Canadian Union of Public Employees] member at UVic [University of Victoria] since 1977 yet had never been to a union meeting! …Workers were immediately empowered to get involved”, recalled Doug Sprenger. 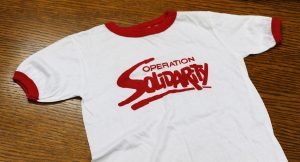 T-shirts were worn by supporters at rallies and events. They were produced in both adult and child sizes.

On July 19, 1983 the first of many pro-Solidarity rallies to occur that summer took place in Victoria.  6,000 attended a hastily called meeting at Memorial Arena. Many were reported to be wearing “Solidarnosc” buttons. Speaking on behalf of the BC Federation of Labour, Secretary-Treasurer Mike Kramer told the crowd “we will not stand idly by and watch the destruction of human, civil and economic rights”. 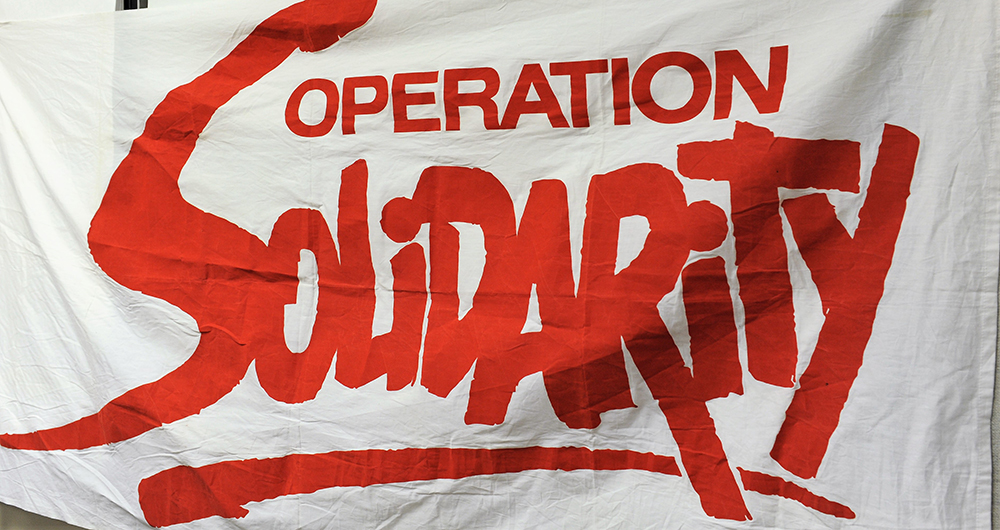 Printed fabric signs with the Operation Solidarity logo were used in rallies and demonstrations throughout the summer and fall of 1983.