Audio clip with transcript: “Kelowna Accord – Joy Langan, BC Federation of Labour”

With the BCGEU agreement announced, Jack Munro boarded a government jet along with Norman Spector and flew to Kelowna to meet Premier Bennett that evening in his living room. They had a deal that would end the escalating strikes – but they wanted to hear it from the Premier himself.

The province held its breath for the next 3 hours, while Munro made calls back and forth to the BC Federation of Labour steering committee to report. In one call, Art Kube told Jack to “get the hell out of there”. On behalf of Operation Solidarity, the committee voted to accept the deal, though it was not a unanimous decision. 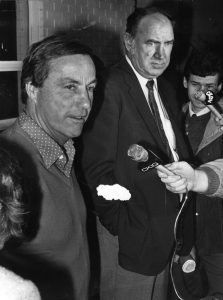 After three hours, and people around the province watching, Premier Bill Bennett and Jack Munro representing Operation Solidarity emerged to announce the ‘Kelowna Accord’.

Shortly before 10:30 p.m., Munro and Bennett appeared on the premier’s porch to announce what would become known as the “Kelowna Accord” – a vague agreement, with nothing in writing.

November 13, 1983, and the days that followed were tough for the leaders of the Solidarity Coalition, as well as many rank-and-file members of Operation Solidarity and the Coalition. They had put so much into this four-month fight and were not consulted or even aware of the private negotiations that quickly put an end to the “general strike”. Teachers had not voted to end their strike yet found themselves back at work on Monday.

Many activists believed they had been on the picket lines for more than labour issues; instead, they received unwritten promises of consultation or advisory committees – a commitment that was easy for the government to ignore, and they did.