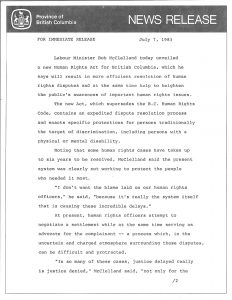 One by one, ministers rose in the legislature to introduce a new bill. When they were done, 26 pieces of legislation had been introduced, alongside a budget that slashed funding for core social programs across the province such as domestic violence shelters. In an instant, the Human Rights Branch and the Human Rights Commission were shut down – commissioners and staff fired and told to turn in their keys.

The Rentalsman, established to safeguard tenant rights, was abolished along with rent controls. Landlords were given the right to evict tenants at will. The Employment Standards Board, the Alcohol and Drug Commission, vehicle testing stations, the BC Harbours Board and legislative scrutiny over Crown corporations were gone. The government had new powers to oversee school district budgets and fire elected school boards.

Two of the bills targeted working people directly. Wage controls were extended indefinitely. Bill 2, the Public-Sector Labour Relations Act, removed contract rights such as seniority, layoff protection, and more that unions like the BC Government Employees’ Union [BCGEU] had fought for. Bill 3, the Public-Sector Restraint Act, was even more shocking. All public-sector employers in the province, including the government, had the power to fire employees without cause.

No provincial government in Canada had ever delivered such a massive, single-day attack on so many existing rights – “rights that most British Columbians had taken for granted.”
(On the Line: A History of the British Columbia Labour Movement. 2018. Rod Mickleburgh)

A cartoon expresses fears raised by the July 7, 1983 BC budget that slashed core social programs and targeted labour groups.