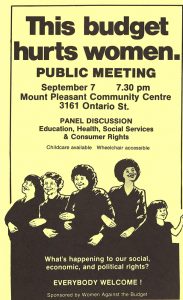 Many of the Social Credit government’s bills were passed by imposing closure on the legislature and limiting debate, despite widespread concerns about the impact they would have on citizens. Public meetings continued to raise awareness.

After this long summer of protest, the government imposed 24-hour sittings and closures of the legislature beginning on September 19. At one point, in a heated debate, opposition leader Dave Barrett was forcibly removed for resisting an order to leave. Many of the bills were passed in the pre-dawn hours between 3 and 6 A.M. 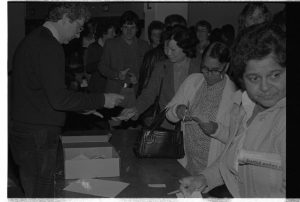 Attention began to shift to actual negotiations. Contract talks between the government and the BCGEU began October 3. The union’s master agreement expired and layoffs of 1,600 government employees would take effect midnight, October 31. This became the BCGEU’s strike deadline, which the membership had voted 87 percent in favour of. The union was adamant: no new agreement without an end to Bills 2 and 3. 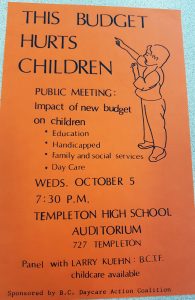 Daycare proponents joined the Solidarity Coalition out of concern that the Social Credit budget would impact children.

Simultaneously, the BCTF was trying to negotiate an exemption from these bills with individual school boards. Susan Reimer was a member of the Burnaby School Board who supported Solidarity. “We stood our ground against sweeping budget cuts, refusing to pass the budget. Threatened from garnishing our wages to losing our homes, but stood strong with parents, CUPE and the BTA [Burnaby Teachers’ Association].” 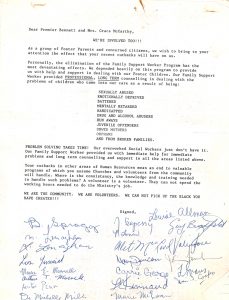 Foster parents in British Columbia were one of the community groups that became involved in the Solidarity Coalition and protested the elimination of Family Support Workers by signing letters to the Premier and Cabinet Minister.

Meanwhile, several hundred Solidarity Coalition delegates held their first province-wide conference.  They irritated many private sector union leaders by passing a resolution calling for job action “up to and including a general strike” to force the government to withdraw all twenty-six bills. Similar demands came from members of public sector and independent unions in Operation Solidarity.