In the early 1980s, Canada experienced the worst economic downturn since the Depression.  The economic conditions were particularly hard on resource-dependent British Columbia.

In 1982, the province’s GDP fell 6.1 percent, unemployment climbed significantly above the national average and constant inflation put pressure on both government spending and unions at a time when resource revenue had been cut in half. 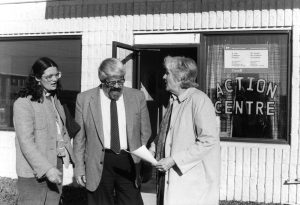 In 1982 the BC Federation of Labour established Unemployment Action Centres around the province to assist workers as unemployment peaked. The Centres became community hubs for organizing the unemployed and offered career counselling as well as food banks.

To help unemployed workers during this tough economic time, the BC Federation of Labour set up Unemployment Action Centres around the province in 1982. They functioned as food banks, career counselling services, and organizing centres.

Bill Bennett, leader of the Social Credit [So. Cred.] Party and Premier of B.C., and his advisers also saw the recession as an opportunity to slash spending in the public sector and curb the power of their unions. 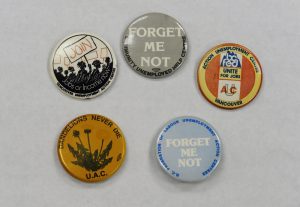 Unemployment Action Centres were established around the province in response to severe economic conditions of the early 1980s. The centres became involved in the 1983 Solidarity movement as “restraint” programs by government threatened to boost unemployment levels.

Community activism was powerful; peace marches drew out thousands across B.C. and groups organized around issues of sexism and racism. In the labour movement, private sector workers were strongly represented, while public sectors were still finding their place in the union community. For example, teachers turned down the right to strike in a 1982 referendum in favour of arbitration.

On February 18, 1982, the premier announced the province’s first public sector wage control program.  It was the opening shot in what became a battle to force workers to accept what Bennett called “the new economic reality.” When Bennett called a provincial election the next spring, his main platform became “restraint”. 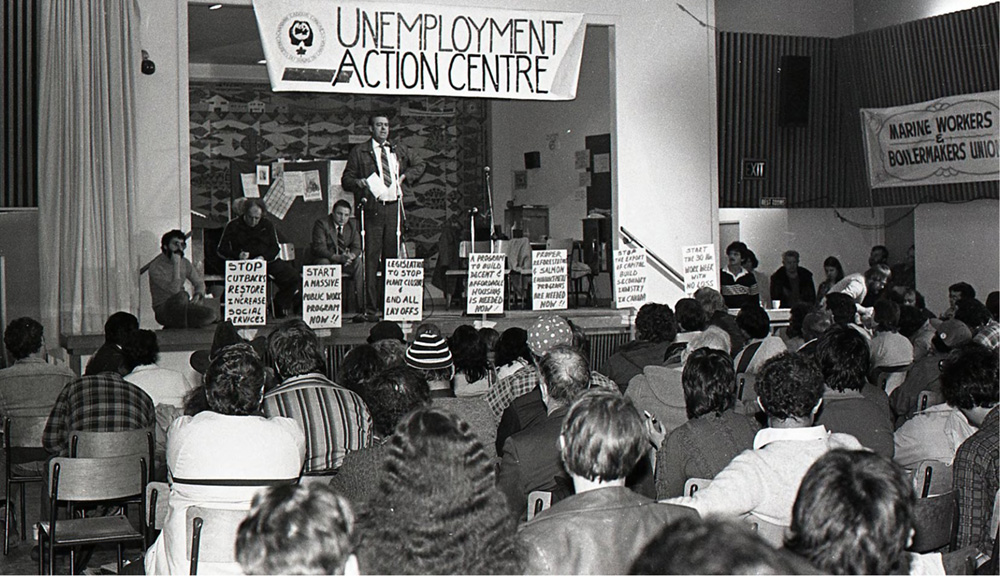 A public meeting called by the Vancouver District Labour Council’s Unemployment Committee on April 9, 1983 at the United Fisherman and Allied Workers’ Union Hall in Vancouver. A provincial general election had been called 2 days earlier for May 5, 1983.