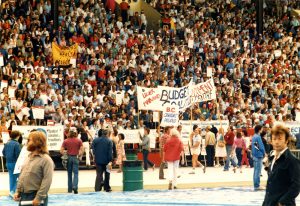 Over 40,000 citizens joined in solidarity at Empire Stadium to express their rage at the provincial government, but the atmosphere was festive.

The emotional highlight of the summer of Solidarity protests came on August 10th, 1983. A rally was to take place at Empire Stadium in Vancouver, and British Columbians from all over took up the call.  Over 40,000 citizens united to express their rage at the Social Credit government – 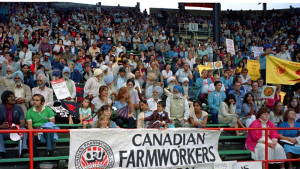 As wave after wave of people filled Empire Stadium the atmosphere was one of community, strength and determination.

but many recall the atmosphere that day as one of community, strength and determination. In one word: solidarity. 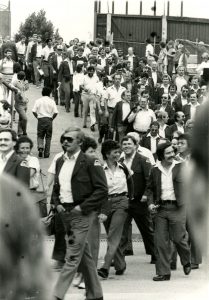 Uniformed bus drivers, members of the Independent Canadian Transit Union, parked their buses along Hastings Street to join the rally.

Musical and dramatic performances and speeches came from the stage, while wave after wave of people filled the stadium near to capacity. Just when it seemed the stands couldn’t hold any more, in marched several hundred uniformed firefighters, played in by the Firefighters’ Brass Band.

Bus drivers, also in uniform – members of the Independent Canadian Transit Union – parked their buses along Hastings Street to join the rally after dropping people off. The day before, the Labour Relations Board had ruled they had a right to participate in the political protest. As the band played, people cheered and cried with joy – “a moment when it seemed anything was possible”, in the words of author and former labour journalist Rod Mickleburgh.

As massive and memorable as this rally was, it was far from the largest or last collective action to take place. People took their energy from this event and put it into actions big and small across the province for the rest of the summer and into autumn. 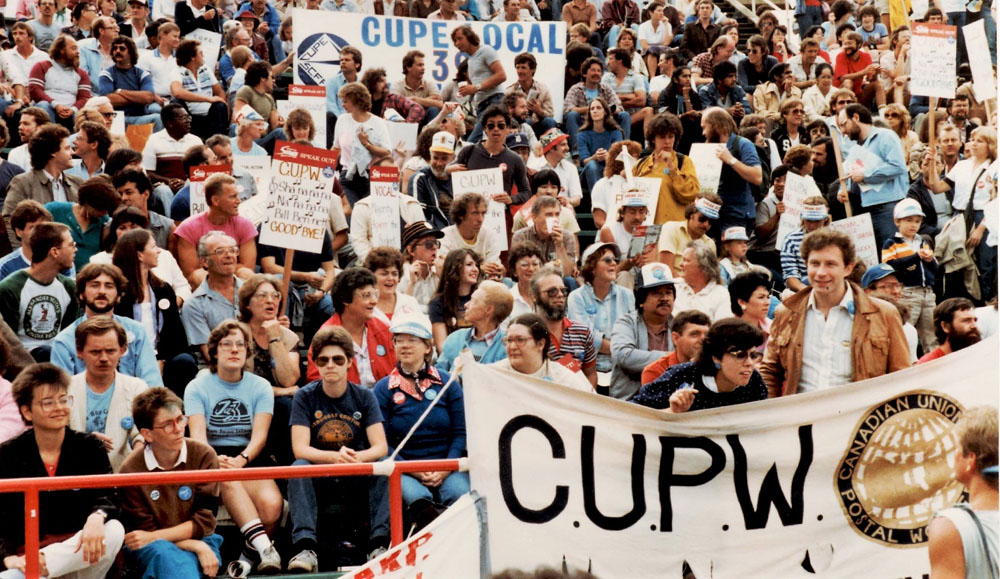 As the band played on, people cheered and cried with joy; it was a moment when it seemed anything was possible.

Chapter 8 – The Solidarity Coalition Chapter 10 – Resistance in the Streets