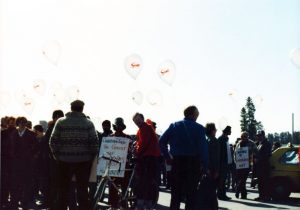 Protests and rallies continued around British Columbia, sometimes combined with local labour disputes. This one in Prince George included picketers involved in a lengthy strike at the local Canadian Tire store.

From August through October, resistance continued and took on many forms – some unsanctioned by Operation Solidarity or the Solidarity Coalition. 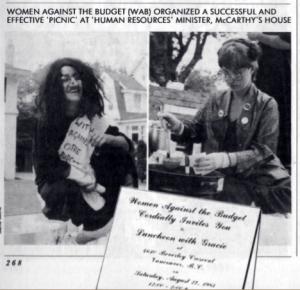 Women Against the Budget organized an unsanctioned “Stop Soup Luncheon” in front of cabinet minister Grace McCarthy’s home on August 27, 1983. Jackie Larkin wears a witch costume with a sign that reads “Witches Against the Budget”. 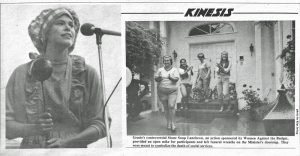 Vancouver Status of Women said that the anti-budget fightback was the largest undertaking by BC’s women “since the struggle for the vote”. Many of the women had never been involved in political activity before. 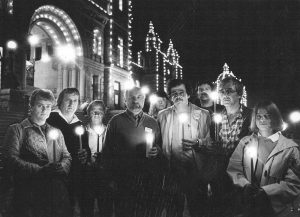 As members of the BC legislature sat around the clock and the government limited debate, members of the Victoria Solidarity Coalition held a candlelight vigil on September 10, 1983. Union activists John Shields and Doug Hensby are at centre.

Petition blitzes began across B.C., and the Solidarity Coalition planned candlelight vigils in Vancouver and Victoria on September 9th and 10th.

Some workers were punished for attending local rallies or even wearing Solidarity buttons, as was the case with Pacific Coach workers in Nanaimo. Their suspensions were reversed when the majority of staff came to work with similar buttons. 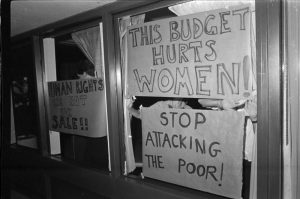 On September 16, 1983 eighty-seven trade unionists, activists and faith leaders occupied the provincial cabinet offices in Robson Square in Vancouver for twenty-seven hours to demand withdrawal of the legislation introduced in July by the Social Credit government.

On September 16th, 87 people, including unionists, community and tenants’ rights activists and representatives of faith organizations, occupied the provincial cabinet offices in Robson Square in Vancouver for twenty-seven hours to take the province-wide demand for withdrawal of the twenty-six pieces of legislation directly to the government. 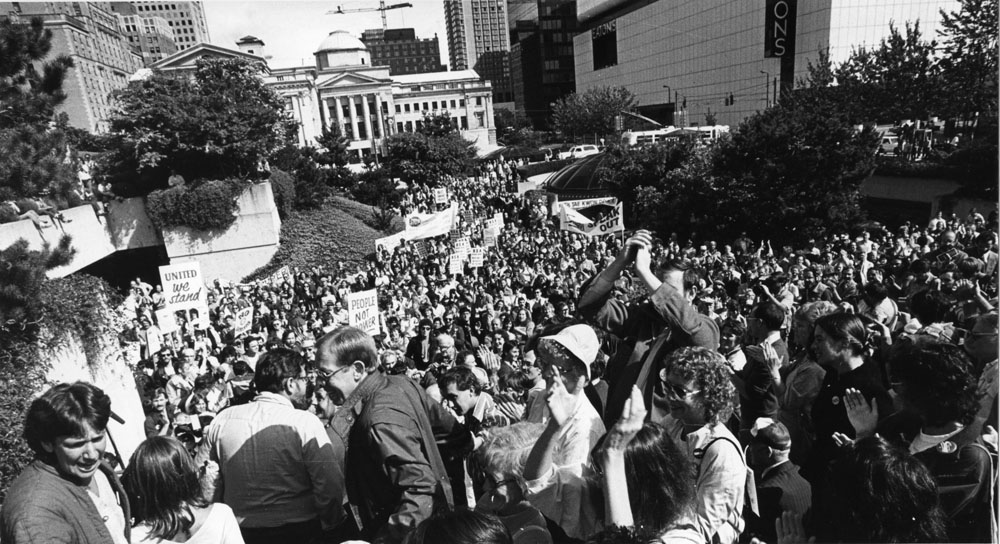 Cabinet Office occupiers emerged from the building to a boisterous welcome from more than 2,000 people outside.

The occupiers emerged to boisterous support from more than 2,000 people who had been staging a demonstration against cutbacks at the Ministry of Human Resources several blocks away. 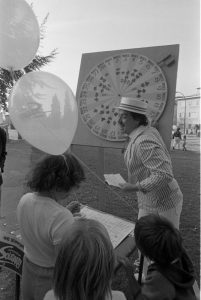 Petitions, rallies and picnics were some of the activities organized during the summer of 1983 by the Solidarity Coalition. While festive, there were many serious matters being addressed at the events.

A “Picnic Against the Budget” for Women & Children’s Week was organized on September 25th; A “Tenants Tent-In” was pitched in Vancouver October 1.

On October 15th, the first issue of the Solidarity Times was published – the movement’s own newspaper to report on province-wide activities. The creativity of Solidarity activism was endless.

Chapter 9 – “Anything Was Possible” at Empire Stadium Chapter 11 – Negotiations