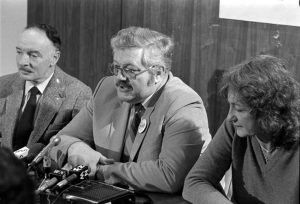 On August 3, 1983 the province-wide Solidarity Coalition was formed. Jointly chaired by BC Federation of Labour President Art Kube, Renate Shearer, fired from the Human Rights Commission, and theologian Father Jim Roberts, the coalition was to harness the energy of community and social justice advocates in opposing the “restraint” budget and bills. Regional coalitions were set up in nearly every part of the province, largely organized through the Federation’s Unemployment Action Centres. 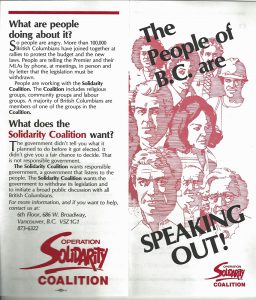 Operation Solidarity and the Solidarity Coalition worked together to mobilize opposition to the package of legislation attacking social and labour rights.

The Coalition involved a diverse range of communities – some formal organizations and some not. Many had previous connections, and others had never worked side by side before, especially with the labour movement. This Coalition grew from the formation of the Lower Mainland Budget Coalition in July. Paid staff were assigned from unions. 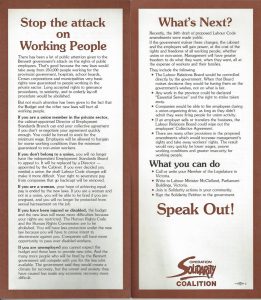 The Solidarity Coalition and Operation Solidarity jointly published a leaflet explaining that the proposed legislation affected more than unionized workers. 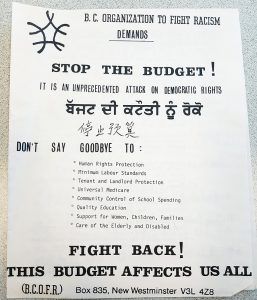 Many of the groups in the Solidarity Coalition had never worked together before yet found the July budget a reason to forge common cause.

Members included representatives of environmental conservation groups; faith groups including Christian & United churches and organizations, the Canadian Jewish Congress, and the Sikh Solidarity Coalition; the Vancouver Gay Community Centre, Lesbian Action Committee for the BC Federation of Women, Council of Senior Citizens of BC, BC Civil Liberties Association, United Native Nations, Daycare Action Coalition, Women Against the Budget, BC Tenants Rights Coalition, BC Organization to Fight Racism, Federated Anti-Poverty Groups of BC, Canadian Federation of Students, Consumer Association of Canada, People Living with Disabilities, Association of BC Social Workers, and many, many more.

Solidarity swung into action with organization of activities and production of all sorts of items: information leaflets, buttons, t-shirts, flags, and the “Solidarity Coalition Bulletin” – anything to help spread the word.