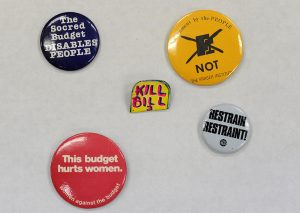 Buttons were a popular method of expressing opposition to the 1983 provincial budget and the restraint policies advocated by right wing think tanks and the Social Credit government.

Communities around B.C. were shocked by the 26 bills that accompanied the budget. Nearly everyone was impacted – women, children, faith groups, people with disabilities, renters, workers and more. Minority groups feared their human rights were at greater risk, with no effective means of pursuing justice. 1600 provincial employees received layoff notices on July 8th. It didn’t take long for these communities to decide they had to fight back. 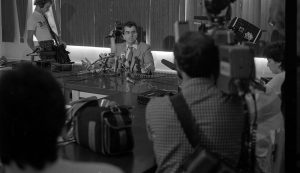 Within days of the July 7, 1983 budget, George Hewison, head of the Vancouver Labour Council Unemployment Committee called a meeting at the Fisherman’s Hall. More than a hundred people showed up.

Within days, George Hewison of the United Fishermen and Allied Workers’ Union [UFAWU] and head of the labour council’s Unemployment Committee called a meeting at the Fishermen’s Hall in Vancouver.  More than a hundred people turned out and formed the Lower Mainland Budget Coalition. They planned a demonstration for Saturday, July 23. 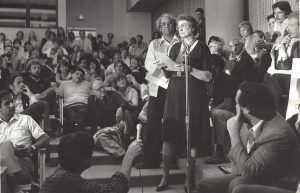 On July 12, 1983 hundreds of people attended a forum called by fired members of the BC Human Rights Commission to express outrage at the attack on human rights.

Community activists, horrified at what was happening to basic rights and social services in the province, were just as fast. The day after Hewison’s meeting, on July 12th, hundreds came to a forum addressed by fired members of the Human Rights Commission. The next day, Women Against the Budget was formed – a broad-based umbrella organization of activist women that brought “radical feminist views and action” to the fight, according to member Lorraine Chisholm. 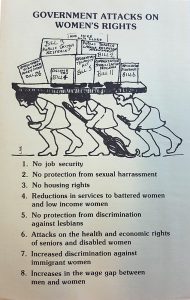 A handbill itemizes concerns of women after the July 7, 1983 budget and legislative package.