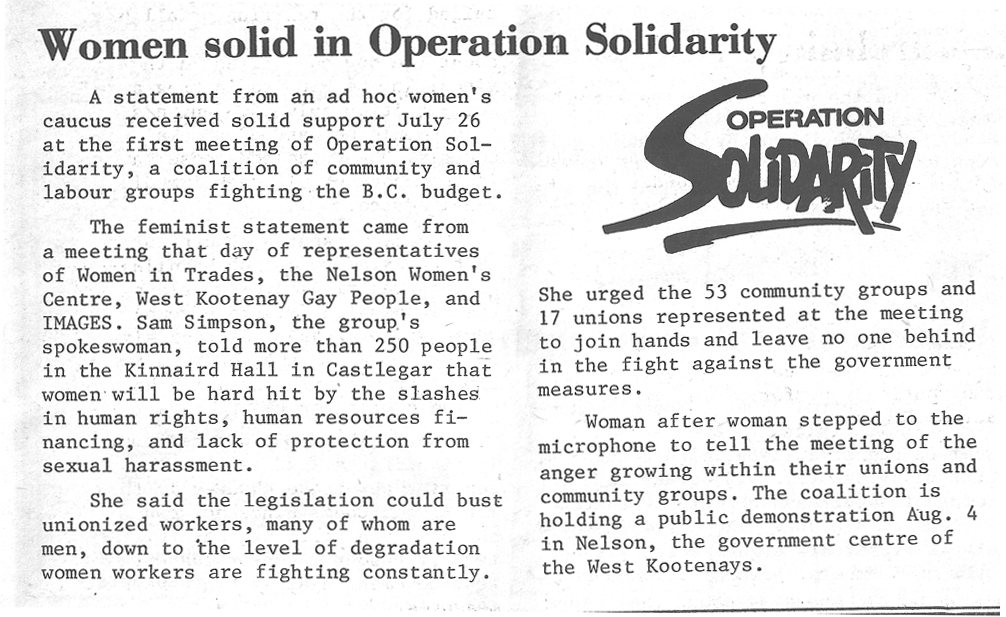 In the small community of Castlegar, 250 representatives of community and labour groups gathered in the community hall on July 26 and provided their support to local women who explained they would be hard hit by the BC budget.

A statement from an ad hoc women’s caucus received solid support July 26 at the first meeting of Operation Solidarity, a coalition of community and labour groups fighting the B.C. budget.
The feminist statement came from a meeting that day of representatives of Women in Trades, the Nelson Women’s Centre, West Kootenay Gay People, and IMAGES. Sam Simpson, the group’s spokeswoman, told more than 250 people in the Kinnaird Hall in Castlegar that women will be hard hit by the slashes in human rights, human resources financing, and lack of protection from sexual harassment.
She said the legislation could bust unionized workers, many of whom are men, down to the level of degradation women workers are fighting constantly.
Operation Solidarity [logo graphic inserted]
She urged the 53 community groups and 17 unions represented at the meeting to join hands and leave no one behind in the fight against the government measures.
Woman after woman stepped to the microphone to tell the meeting of the anger growing within their unions and community groups. The coalition is holding a public demonstration Aug. 4 in Nelson, the government centre of the West Kootenays.