For some workers, the cuts had consequences far worse than the loss of a job. 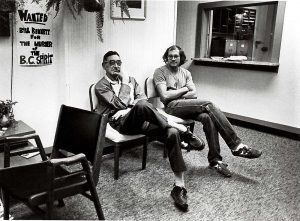 Union members ensured bosses were kept away during their occupation of the Tranquille institution. It was the first action under the auspices of Operation Solidarity in July 1983.

On July 19, 1983 members of the BCGEU began a three-week occupation of Tranquille Institution in Kamloops, after learning the provincial government planned its closure as part of its July 7 budget. There were no plans or procedures put in place regarding what would happen to the residents of Tranquille, who lived with mental and physical disabilities. The employees, many of whom had worked with the same residents for years, decided to take things into their own hands.

On July 19, 1983 members of the BC Government Employees’ Union began a three-week occupation of the Tranquille Institution in Kamloops after learning its closure was planned. They raised a hand painted flag replacing the BC flag on the facility.

A hand-painted union flag was raised, locks were changed, managers evicted, and workers took control of the facility. All services were maintained, including a fire department and maintenance. The workers elected a council, with representatives from each shift who made decisions democratically. The occupation lasted 22 days and came to an end with an agreement from the government. 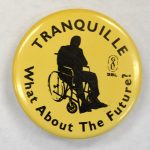 The BC Government Employees’ Union fought the planned closure of the Tranquille Institution in Kamloops arguing there were no plans in place for the residents who lived with mental and physical disabilities.

Tranquille ultimately closed in 1985, with many residents placed into group homes. Workers received employment opportunities at other similar institutions.