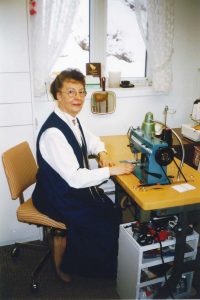 Marie-Rose at her sewing machine

That day, like every other school day, young Marie-Rose walked to the Château-Richer Convent along Avenue Royale. On her way home, she noticed an ambulance parked outside her home. Her mother, Rose-Anna, had fallen ill. Marie-Rose’s life would never be the same. Little did she know that the events of that day would lead to her opening her own business as a seamstress.

The eldest of eight children, Marie-Rose left school for good to care for her brothers and sisters, including doing the cooking. Once her mother was better, Marie-Rose didn’t go back to continue her schooling at the convent; instead, she had to find herself a job. Fortunately, she had a knack for sewing, as she and her mother used to make shorts for all the children in the family out of old shirts. Despite her lack of experience, she was hired by Paquet, a company on Rue Saint-Joseph in Québec City, as a corsetmaker. There, she learned to repair and fit corsets.

When her supervisor suggested she take a night class, Marie-Rose jumped at the opportunity. At the Singer Sewing Machine Factory and at her aunt Madeleine’s sewing school, she mastered the various techniques of the trade. She also learned more about fitting and repairing women’s undergarments at the Dominion Corset factory. One stitch at a time, Marie-Rose became an accomplished corsetmaker and seamstress. 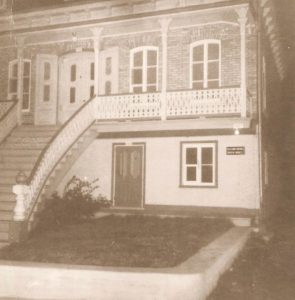 When she moved back to Château-Richer, she bravely announced to her father that she planned to open her very own business.

“I went to my parents’ place and said to my father: ‘I’d like to start my own business in Château-Richer.’ Well, let me tell you, that wasn’t the end of it!”

It was a bold move for a young woman at a time when the business world was dominated by men! Not a single bank agreed to loan her the money. Undaunted, she rented a space in the heart of the village and opened up her shop in 1962. Salon Marie-Rose offered corsetry services and sold lingerie. Six years later, she relocated her business to 8415 Avenue Royale. 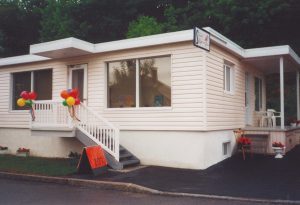 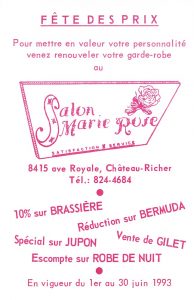 For over forty years, Marie-Rose provided custom fitting, repairs, and seamstress services. But she was more than a tailoress; she was a discreet and attentive confidante to her customers who would spend hours in the “confessional chair” next to her sewing machine. 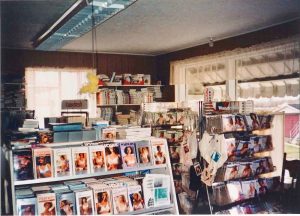 Marie-Rose was also actively involved in the community, teaming up with her cousin Francine to restart the Château-Richer Cercle de fermières (women’s institute). She even had her own TV show! Not long after pointing out to the manager of the community television station that there was a lack of “women’s programming” on his channel, she was put in charge of hosting two shows, La place de la femme d’affaires (women in the world of business) and Marie-Rose reçoit (Marie-Rose hosts…), where she interviewed local businesswomen.

Marie-Rose is proud of her career, and continues her volunteering to this day, helping contribute to the village’s vitality. Today, she takes great joy chatting with her former customers, who recall the wonderful service she provided.

Château-Richer will long remember a modern woman whose determination and drive paved the way for women entrepreneurs in the region.