Hugh Brown couldn’t believe his luck! In 1853, at the age of 26, the young Scottish immigrant had just been hired by Séminaire de Québec to farm 800 acres at the Ferme des Coteaux farm in Saint-Joachim, which had been without a farm manager. The farm had been selected to be a model of its kind. Upon arriving at the farm, Brown was struck by the large apple orchard, the stone house, and the sloped land that had inspired its name (The French word “coteaux” means hillsides.). 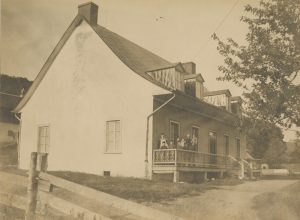 Farmhouse at Ferme des Coteaux, circa 1900 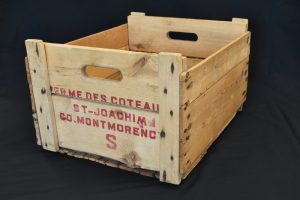 While the Protestant farmer had no inkling at the time, not long afterwards, he would convert to Catholicism and marry Euphémie Fortin, a young woman from Saint-Joachim. Together, the couple would go on to carry out various projects for the Seminary, although the model farm project was eventually abandoned. In 1855, the farm was expanded with the addition of a dairy and a sheepfold.

As well as growing cereal crops and vegetables, and maintaining the apple and plum orchards, the Browns raised poultry, pigs, sheep, and dairy and beef cattle. Over the years, numerous additions were made to the farm, including beehives and grapevines. Ferme des Coteaux also supplied the Seminary with butter and firewood. The couple raised their eight children on the farm, and lived there as a family until Euphémie’s death in 1879. 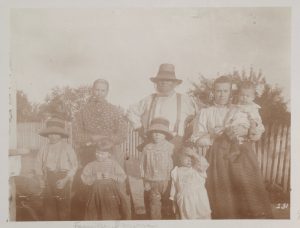 Indeed, Hugh Brown was a lucky man. But in October 1891, his luck appeared to run out, at least for a time, when the house and one of the barns burned to the ground and had to be rebuilt. Fortunately, Hugh was able to count on the help of his children and of Marie, his second wife. Once the house and barn were rebuilt, he got back to work and carried on the long agricultural tradition of Séminaire de Québec, which had been farming the land in Saint-Joachim since 1667.

Today, Château-Richer looks back at… the farmers like Hugh Brown, who worked the land—and are still working the land today—carrying on the region’s reputation as an agricultural hotbed.