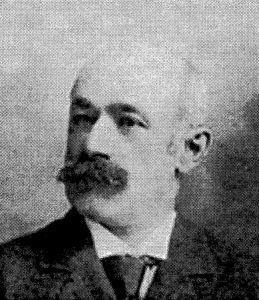 When he decided to set up shop in Château-Richer near Rivière-aux-Chiens in the late 19th century, Arthur Toussaint gave a serious boost to the region’s economy. It all began in the 1890s, when he leased 400 acres on Lot 13 of the Château-Richer land registry.

In June 1895, his spouse Joséphine purchased the land for $4,500. Three years later she transferred it to A. Toussaint & Cie, the company founded by Arthur and his brother Joseph-Aimé, who planned to get into the wine and spirits business.

A. Toussaint & Cie winery in Château-Richer

Arthur got the green light from the town to open the winery, and in February 1898, the town council granted him a tax exemption for 10 years, provided he employ only local residents to build the winery and make the wine.

Bottle of sacramental wine produced by A. Toussaint & Cie

Production kicked off a few months later, and the business prospered for a number of years. Using grapes and concentrates that it had brought in by train, the winery produced and bottled about fifteen different wines. It also launched a vinegar line, to process the wine that was overly fermented. But the company’s speciality was the sacramental wine it sold to parish churches. A. Toussaint & Cie even supplied Séminaire de Québec! 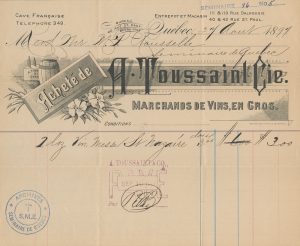 Receipt from A. Toussaint & Cie

When Arthur died in a tragic drowning accident in 1901, his shares in the company were passed on to his children. From 1906 to 1919, the business belonged to a company of which Joseph-Aimé Toussaint was a member. The creation of Commission des liqueurs (liquor board) in 1921 signalled the end of the winery, which by that time was in the hands of new owners. The factory subsequently housed, in turn, a cidery, a company specializing in fish smoking and packaging, and a chicken farm. In 1956, the building was destroyed by fire, and with it, the business founded by the Toussaints. Today, all that remains are memories and a few stones. 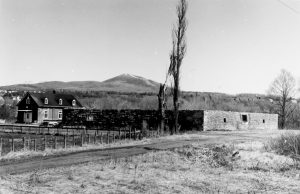 Ruins of the factory built by the Toussaints, c. 1900

Today, Château-Richer looks back at… the industrial period ushered in by Arthur Toussaint. The factory ruins can still be seen near the railroad track just north of Route 138, on the outskirts of Sainte-Anne-de-Beaupré.