In the early 1930s, Alvin Baker ran a restaurant in Château-Richer, near Rue de la Station and the nearby quarry, which he also owned. Baker was looking to develop his business, and decided to rent the heritage home on Avenue Royale owned by Idola Simard to turn it into an inn. And so it was that Baker’s Inn opened in 1935. 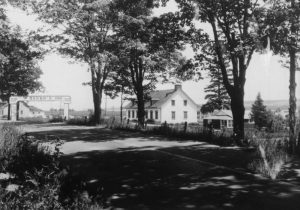 Alvin Baker would welcome tourists and pilgrims heading to Sainte-Anne-de-Beaupré. For two dollars, including all-you-can-eat meals, they could rent one of the seven upstairs bedrooms. The house specialty was steak. Juliette Cauchon, Alvin’s wife, would prepare the meals in the log dining area behind the main building. The inn’s reputation spread quickly, as far as the United States. Alvin was known for his generosity, and as a native English speaker, he was especially popular among American tourists. In 1940, The New York Sun lauded the warm hospitality offered at Baker’s Inn and the merits of its copious and affordable menu.

The current owner of Auberge Baker, Gaston Cloutier, talks about Alvin Baker and his inn – (English and French subtitles available)– View the video with the transcript (EN) 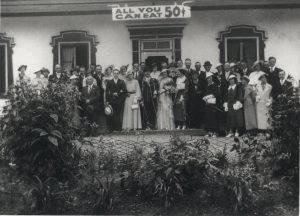 As his clientele grew, Baker decided to add a number of cabins and cottages, and was soon able to accommodate nearly one hundred guests. It wasn’t long before the inn boasted a reputation among tourists as one of the region’s best places to stay. 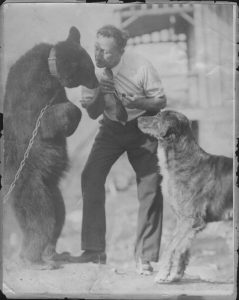 Alvin Baker with his pet bear and dog

Alvin Baker had always loved animals, and had long cherished the rather unusual dream of owning a bear. So it was no surprise when he adopted and tamed a black bear he named Pete, and taught it a number of tricks.

The animal would delight the crowds, further adding to the inn’s popularity. Tourists would often line up to have their photos taken next to Pete, the bear!

When Alvin Baker died in 1962, the inn changed hands a number of times before being bought in 1975 by Gaston Cloutier, the grandson of Idola Simard. Cloutier still proudly operates the inn to this day. 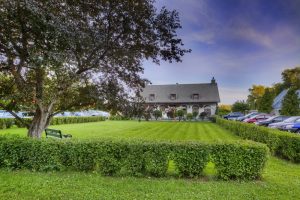 Today, Château-Richer looks back at… the warm hospitality Alvin provided at Baker’s Inn. Nearly 85 years after it first opened, Auberge Baker is still a must for tourists and locals alike, with its charming and delightful decor.