Who would have guessed that Amanda Jalbert, née Gagnon, would go down in the region’s history? She originally lived in Québec City with her husband, Rodolphe, president of the Québec Coal Inc. company, before moving to Château-Richer in 1919, where she was a devoted mother to their children while working alongside her husband on the farm. In addition to working their land, the Jalberts also ran a restaurant in the summer months and a sugar shack in the spring that was a source of great delight to their grandchildren. 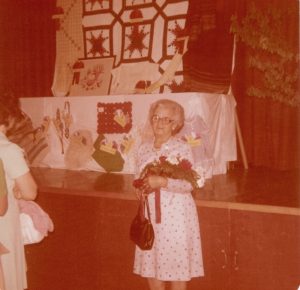 On February 12, 1942, Amanda earned herself a place in the history of Côte-de-Beaupré when she founded the Château-Richer Cercle de fermières (women’s institute), which would specialize in textile handicrafts. An issue of the newspaper Le Château-Fort from the day described the Cercle as having both a social and family–oriented mission, i.e., to make the household chores of women easier and more enjoyable, while enhancing the appeal of rural life for their children.

And what a success her initiative was! Over 100 women would gather in their free time in a room at Maison L’Heureux. There, they would craft catalogne rag rugs, wool blankets, and crocheted carpets they would sell to tourists at various places throughout the village. Membership cost $1 a year, and the women would take turns at the two weaving looms, with a third loom added not long afterwards. 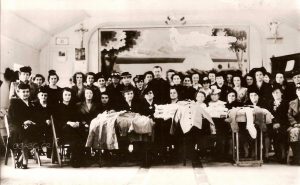 Members of Cercle de fermières at L’Heureux House in 1945

A woman of action and conviction, Amanda Gagnon Jalbert remained at the head of the association right up to 1960. As its chair, she would organize meetings and ensure everything ran smoothly. The members of the women’s institute could sign up for weaving, sewing, and cooking classes. Despite all her responsibilities, Amanda still found time to pass on her know-how, including to her grand-daughter Marie-Rose, who would accompany her to the meetings and whom she taught to weave.

When Amanda left her position, enthusiasm for the Cercle des fermières began to wane. Fortunately, in 1969, her grand-daughters Marie-Rose and Francine, along with several others, took up the torch. To this day, the Château-Richer Cercle de fermières plays an active role in handing down knowledge and know-how related to textile handicrafts.

Today, Château-Richer looks back… with pride at the founding member of its Cercle de fermières (women’s institute). The room where the association has been meeting since 2002 is known as “Amanda’s Workshop.”