Once the construction site had been determined, engineers had to choose a crossing model. Two options were ruled out. 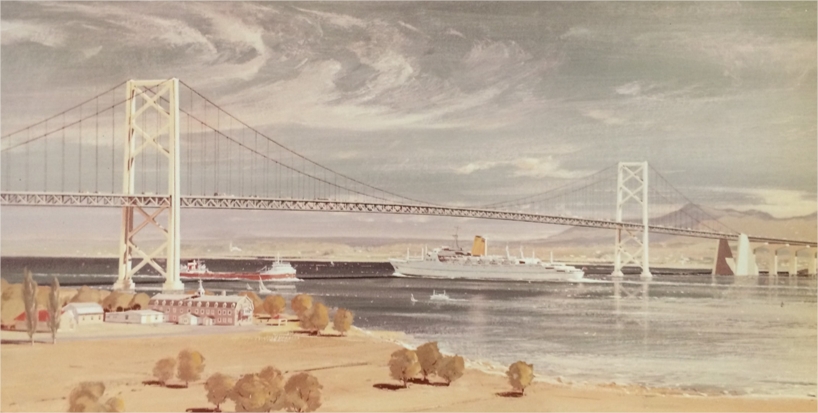 A proposition by engineers for a suspension bridge between Longue-Pointe and Boucherville, 1961.
Quebec Transport Ministry Archives

A suspension bridge was the only possible model that fitted the Port’s requirement of a 50-metre minimal height and 732-metre central crossing distance. This structure was 5 to 10% more costly than a standard immersed tube tunnel for two reasons: first, such a clearance required approaches of at least one kilometre in order to achieve a reasonable slope; second, the superstructure would require a phenomenal amount of steel, which needed to be shipped in from the United States. The bridge option precluded the Port’s idea of a connection with the Boucherville Islands, in addition to being more harmful to Longue-Pointe.

An underwater tunnel project between Hochelaga and Longueuil, 1880.
L’Opinion publique

The thick layer of schist on top of the bedrock of Montreal’s eastern riverbed meant that a tunnel would need to be dug much deeper than normal, which increased costs. To accommodate the projected six-lane highway using this type of tunnel would be particularly complex. Tunnel boring machines were circular, and their diameter could never achieve the desired dimensions. The only way to build a six-lane highway was to either bore two parallel three-lane highways, or increase the diameter of available machines. Neither of these scenarios was realistic. Whereas the first option would have doubled the development costs, the latter would have generated near insurmountable slopes. An underwater tunnel therefore remained the more complex and the more costly option.

The Longue-Pointe Site is Selected A Bridge-Tunnel: The Perfect Mix