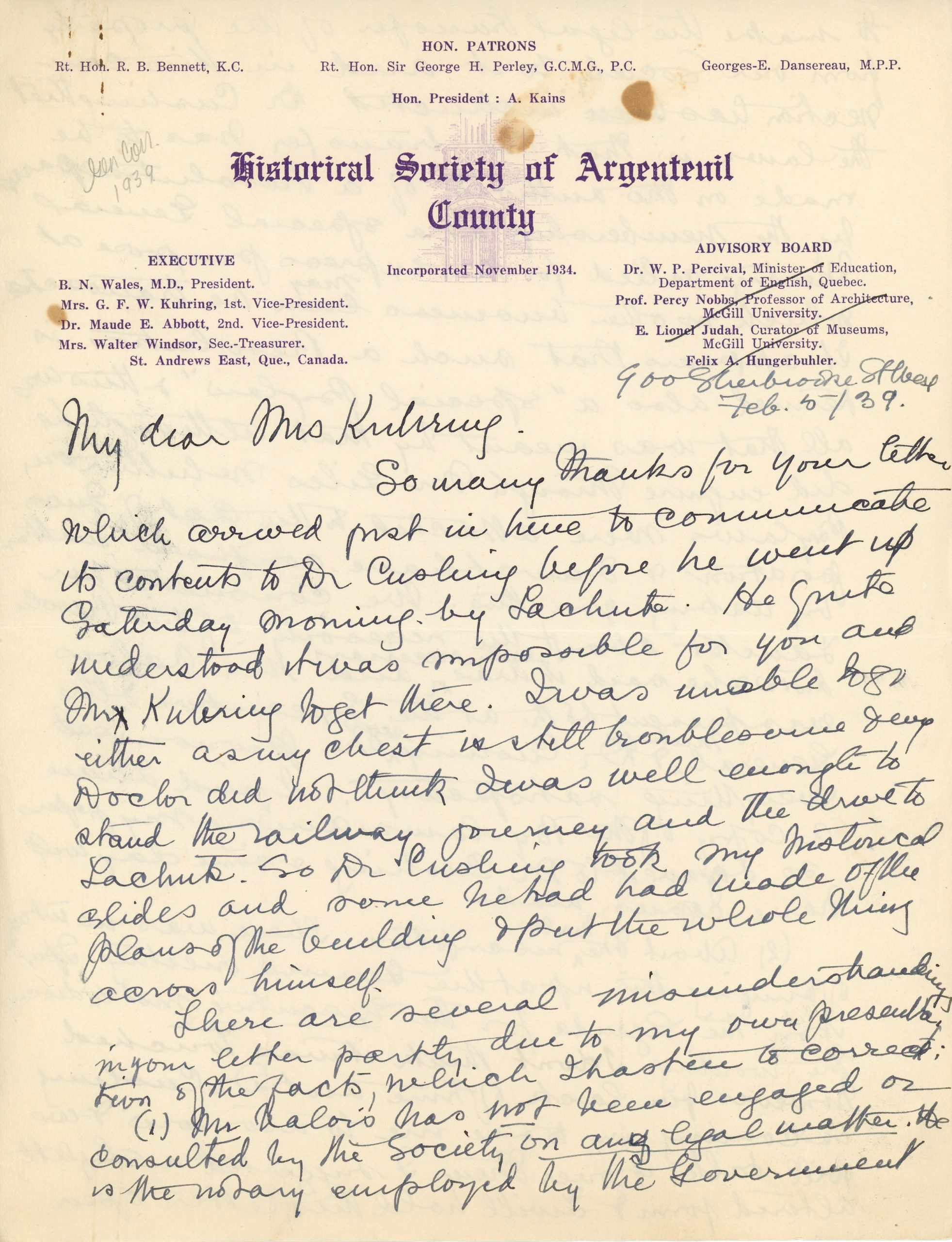 Maude Abbott and Mrs. Kuhring of the Historical Society of Argenteuil County managed the day-to-day affairs of the Carillon Museum. In her letters, Maude Abbott adopted a friendly and personal tone, as in this case, when discussing the best strategy to convince Governor General Lord Tweedsmuir to attend the opening of the Museum’s first season. At the end of the letter, it is understood that Maude has not quite recovered from a fall in which she fractured a rib.

So many thanks for your letter which arrived just in time to communicate its content to Dr Cushing before he went up Saturday morning to Lachute. He quite understood it was impossible for you and Mr Kuhring to get there. I was unable to go either as my chest is still troublesome & my doctor did not struck I was well enough to stand the railway journey and the drive to Lachute. So Dr Cushing took my historical slides and some he had had made of the plans of the building & put the whole thing across himself.

There are several misunderstanding in your letter partly due to my own presentation of the facts which I has here to correct;

(1) Mr Valois has not been engaged or consulted by the Society on any legal matter. He is the notary employed by the Government to make the legal transfer of the property from our society to it and in this connection has been instructed Dr Cushing that the law is that this transfer has to be made on the authority of a resolution passed by the membership at a special General meeting called for this express purpose at which no other business may can be transacted. It appears that such a resolution is termed also a « special Bylaw » & this was all that was meant by that although he did enquire through Mr Giles whether our Bylaws were attached to the Act of Incorporation & I would have confused matters by asking you this. We consulted Mr Lanctôt about the necessity of this resolution & he said it was legally necessary and Mr Valois was present both at the Executive of the general meeting & Dr Cushing says he pronounced everything satisfactory. I find I have a copy of the Bylaws among my papers so I gave it to Dr Cushing & some day will have copies made.

(2) About the Wales inscription. There was no such cut on opening this up at the General meeting. I put it on the agenda for the Executive just to discuss the wording. I don’t think it was touched however for lack of time but Dr Cushing is coming in to see me tomorrow & we will talk it over then. I suggested a slightly altered form & I will hold this letter open until then & enclose it for your consideration. If you can get the order for both in immediately there is no reason why they could not be paid for out of the government money as permanent fixtures. I will add a postscript on this towards after seeing Dr Cushing.

(3)  About the grounds. There is a clear understanding that $ 400,00 was to be spent on the grounds and that leaves I imagine a clear $ 110,00 still to be expended. Mr. Nobles suggested that we spend the whole of the $ 690,00 on « permanent fixtures » & then take the money for the grounds out of the funds we would have used for this purpose; but as things are going it does not look as though we would have any such balance at present, and I think we will have to bring pressure on the Government to pay over this money or hold it in someway for this purpose. I will talk this over with Dr Cushing & have been take up the matter with Mr Nobles. I have to give a lecture at Peterborough expenses paid due on Feb 13th but I am not such well enough yet to go & I wired last night, asking them if they could put it off a week or a fortnight longer. I think if we do some preliminary correspondence with Mr Williamson, I will be soon on my way back from P. (Peterborough) to Ottawa & interview some of the powers about it. Anyhow the $100,00 (at least) must be provided.

(3) The Bradleys have signified they want to come in April. It is now a question of rents. Mrs Walsh (who’s in town) says she is sure they will go for $15,00 a month. (+ light & heat) & I wrote to Col Hooker asking him to offer them that (thought they had says they wanted $25,00) Dr Cushing was to have seen him or them about it yesterday. This also I will see on about tomorrow.

My recovery has been slow as I have after all a fractured rib at the sided the old injury, but I were going on all night. Many thanks for the enquiry.

I hope that you will be in the city some time this winter & that we can have a subcommittee meeting here. Is there any chance of this?

With best regards to you both,