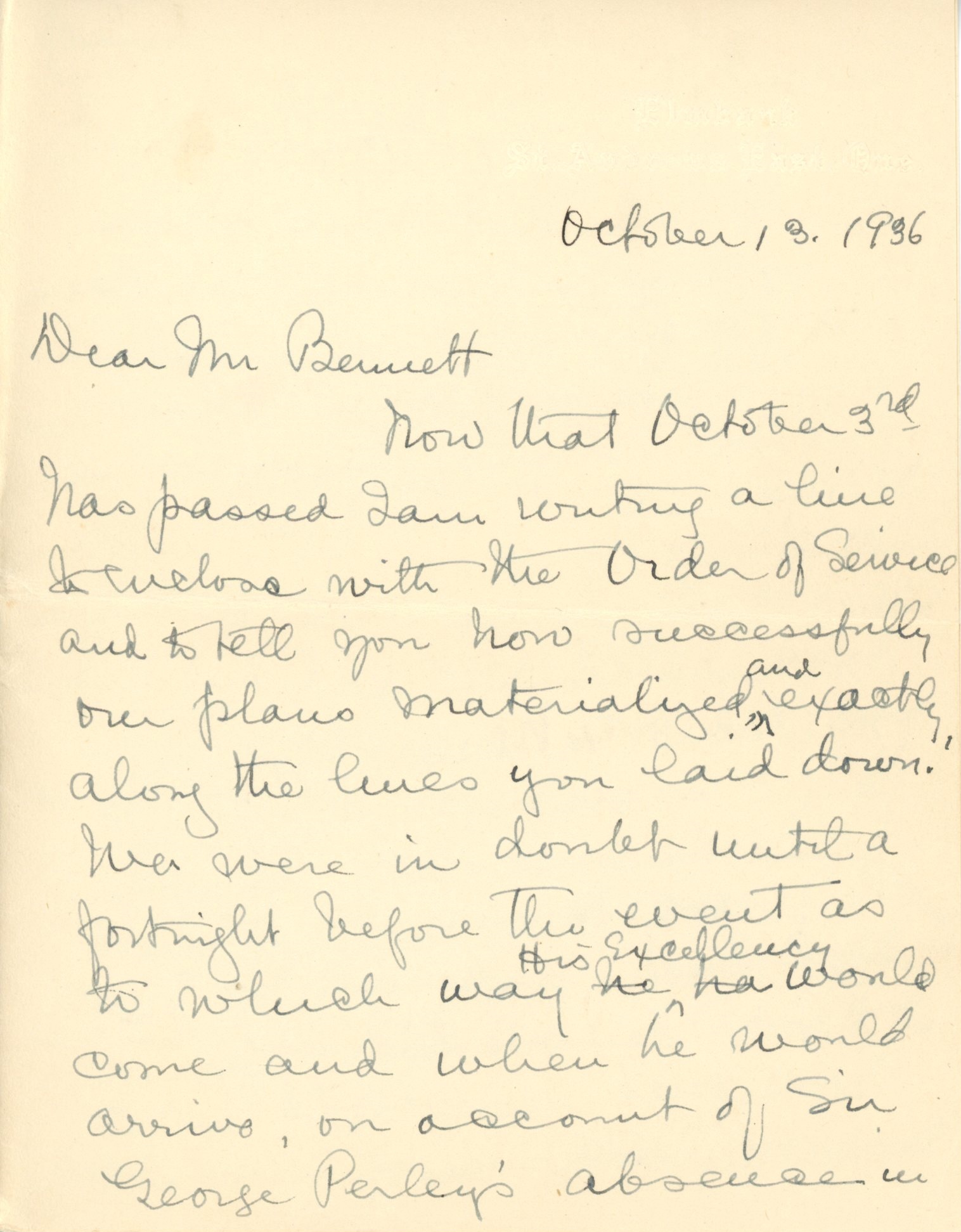 Maude Abbott corresponded with Richard Bedford Bennett, leader of the Progressive Conservative Party of Canada, about the unveiling of the memorial tablet. Bennet, the 11th prime minister of Canada (August 7, 1930 to October 23, 1935), was to attend the ceremony but was prevented from doing so at the last minute. Maude relates the emotion that moved those present at the ceremony in a letter addressed to Bennett on October 13, 1936.

Now that October 3rd has passed I am writing a line to enclose with the order of service and to tell you how successfully our plan materialized and exactly along the lines you laid down! We were in doubt until a fortnight before the event as to which way his excellency he ha would come and when he would arrive, on account of Sir George Perley’s absence in England, but as soon as he returned he put me in touch with Col. O’Connor & events moved swiftly and the little programme we had outlined was carried on in all its details.

The Vice-regal party arrived in front of the townhall at 12 :45 pm and were welcomed there by the Mayor and Promayor (without address). Lord Tweedsmuir walked to this house from there (he came by motor from Ottawa) and found luncheon was served there promptly. It was given by Arthur Abbott who supplied his own caterer and waitress and the it was served at my grandfather’s family table which came back to me for the occasion from some friends who had borrowed it from us many years before.

We sat down 16, being Mr Abbott with Lord Tweedsmuir and the Bishop on his right and the Hon. Fernand Rinfret (representing the Government of Canada) on my left with Lady Perley. On the opposite side I sat with Rt Hon Arthur Meighen, Mrs Arthur Abbott and Mr A. C. Kains sir George Perley on my right and sir Edward Beatty and Sir Charles Gordon on my left. At the two ends were Mr Fred Harriet Meredith and Colonel O’Connor, and Mr A. C. Kains and Captain Adrane. Miss Harriet Abbott, the cousin with whom I live and who is Sir John Abbott’s youngest daughter, sat between the Bishop of Montreal and Mr Meredith on the far Mr Abbott’s side of the table. After coffee was served we adjourned to the drawing room for a few minutes where the young Abbotts of the third generation (12 grandchildren & one great grandson of Sir John) were assembled with a few other friends and were presented to his excellency.

A great crowd had assembled both on the reserved seats in the church and outside and it was an exquisite autumn day. I had had loud speakers installed with $50,00 of the grant made up and everyone heard the beautiful dedication service and the addresses given perfectly, even across the street. The tablet is perfectly beautiful and worthy of the immense ovation which its unveiling and dedication brought. Ten other small memorial plates attached to the endowment board were dedicated also and added to the interest of the occasion as most of them were historic also.

By a happy combination the Duke of York’s Royal Canadian Hussars, (a continuation of the Argenteuil Rangers organized by Sir John Abbott in 1862), have a retired Colonel living here, and through him we asked for and obtained a Guard of Honor, 16 men and officer and also five service men who were a great help, and the whole added immensely to the effect. Lord Tweedsmuir’s address at the Church was very charming, indeed he charmed everyone with everything he did.

At the close of the service, he and the other guests went to the Townhall opposite and inspected the loan exhibit of the Historical Society of Argenteuil County and had tea there in a little bower out of & by made of cedars, from the main hall.

Nothing so impressive has happened here for at least three quarters of a century and to those who like myself are immersed in a knowledge of the halcyon days of St. Andrews at that time it brought a most tremendous thrill. It was very wonderful too to stand by and see this great spontaneous tribute to a great man in his native place and in the Church founded & built by his father. I am quite sure it would have satisfied the ideal you set before me of a national historic occasion in which all suited to do him honour in the way as Lord Tweedsmuir said he would have best liked it to be done.

I hope you will pardon this long letter. We owe so much to the personal interest you took in it and the substantial help you gave us that I cannot but feel you would like a few words descriptive of what actually did happen of the immense success it has all been.

I am sending you herewith enclosed the Order of the Church service and the card of the Historical Society worthy to their loan exhibit and I will send you from Montreal in a day or two a clipping from one of the papers giving an account of the ceremony.

With kind regards and again thanking you more than I can say for the immense help you gave me in the organization of this great occasion & hoping you will come here to see the tablet next spring.